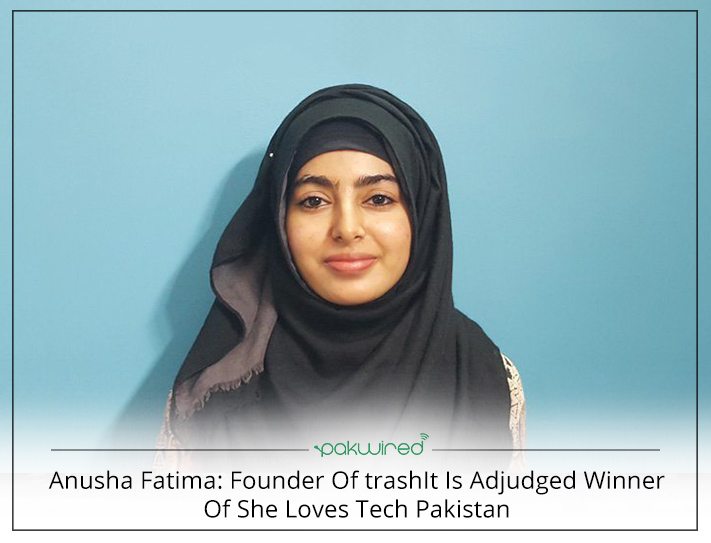 Recently, CIRCLE arranged a startup competition, primarily for the budding and aspiring female entrepreneurs of Pakistan. Titled as She Loves Tech Pakistan, the competition is won by Anusha Fatima who is the founder of trashIt. She was adjudged winner from a pool of 80 applicants.

As the name suggests, it revolves around the very problem of disposing garbage in Pakistan. The team of trashIt presented a 4 minute pitch in front of the live audience and a panel of industry judges. They tried to explain the basic problem of garbage disposal problem in the country. In addition, the team also clarified how the load of garbage on the streets of Pakistan is hindering the growth.

Thereafter, they presented the possible and some clever solutions of placing bins which can transform the organic waste from households into fertilizers. As a result, it will lessen the amount of trash for disposal.

While speaking of the advantages of trashIt joining the She Loves Tech Pakistan, Anusha Fatima stated:

“Through the She Loves Tech initiative, CIRCLE connected me to mentors such as Raza Matin (country consultant, Google) who helped my team further advance trashIt.”

Bit about She Loves Tech Pakistan

It is a global competition which takes place in 8 countries including; Canada, China, Hong Kong, Germany, Indonesia, Israel, Pakistan and Singapore. The winners from each countries will go on to compete with each other in Beijing on 16th September. From Pakistan, Anusha Fatima and her team will go to Beijing, China to participate in the competition. PIA will bear all the traveling expenses of the team as it partnered with CIRCLE before the competition.

The sponsors of She Loves Tech Pakistan, Lakson Investments and Sybrid will present mentorships to the runner-ups: PMS project by doctHERs, Sehat Kahani and meraPaisa.

Statements of the speakers

While addressing the audience, the Deputy Mission Director with USAID, Denise Herbol stated:

“Entrepreneurship allows women more flexibility in defining their own space. In addition, it will also help them in choosing who they work with. It is empowering to see some of these tech startups talking about ways to improve women’s mobility because that is women’s biggest problem right now”

The co-founder of CIRCLE, Sadaffe Abid acknowledged the members of the competition. She said:

She also affirmed to extend her support to women in Pakistan who are looking forward to build their careers in entrepreneurship.