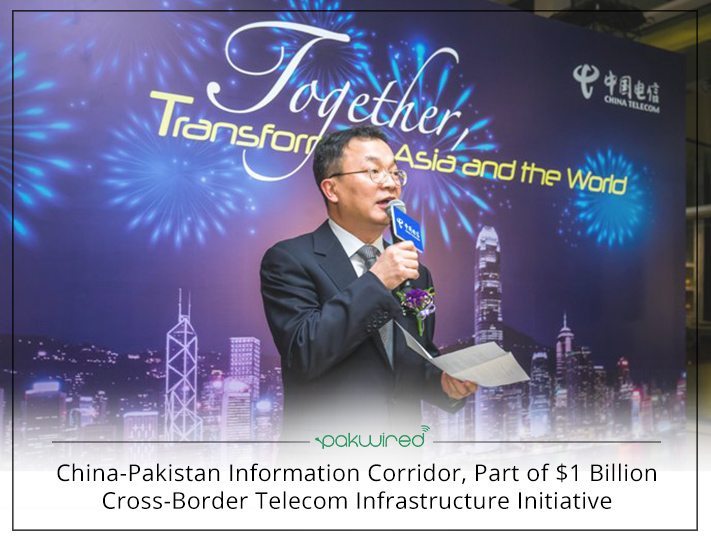 In its bid to expand and grow beyond the Chinese border, China Telecommunications Corp. is launching a new cross-border telecom initiative of China-Pakistan information corridor. The company aims to enter into potential new markets in Southeast Asia along with strengthening its foothold into Pakistani market with the ever increasing opportunities created by the China Pakistan Economic Corridor (CPEC).

Unveiling the future growth plan which will see the company increasing its international infrastructure footprint, Deng Xiaofeng, CEO of international unit China Telecom Global Ltd addressed to media on Tuesday. He stated that three new cross-border telecom initiatives including China-Pakistan information corridor, the China-Laos-Thailand and the China-Bangladesh-Myanmar-India are in the pipeline and roll-out plans are at different stages.

He said in his statement:

“Cross-border telecommunication infrastructure is one of the first steps for international cooperation, and our experience in deploying one of the world’s largest information networks in China can help narrow the digital gap.”

The financial numbers indicate that the company has planned to invest around $1 billion within the next five years under the project termed as ‘Belt and Road’ initiative – a major but undisclosed portion of this investment is aimed to improving further infrastructure within Pakistan.

Also Read: Ministry of IT and Telecom issues draft of National IT Policy

The infrastructure projects beneficiary of this investment, include, but are not limited to:

The vision aims to align the infrastructure to future data and voice traffic demands. These expansion projects will be carried out in Pakistan, Southeast Asia, and even locations within Europe.

When asked about raising capital for the said project, Deng added that State-owned and private capital firms are now keen to be part of their efforts. He also emphasized that the company not only needs the financial support of these external entities but also needs their expertise to help them evaluate about the plausibility of their expansion projects. Deng also didn’t rule out the possibility of joint ventures with already existing telecom players in the region for a push towards 4G but refused to go in further details on the matter.

As of 2016, China telecom boasts of 4,700 overseas employees and 13 high-tech data centers in six countries other than China. China Telecom also expects that current expansion plan along the ‘Belt and Road‘ have a potential to create market worth $10 billion to $20 billion for the telecom giants to tap over the next five years.