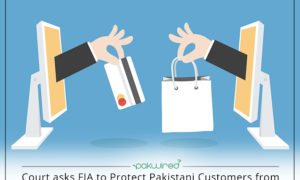 The court order comes to FIA as a result of a case filed by a citizen from Gujarat against an online company. The defendant had claimed that the online company had committed fraud with him.

As per the initial investigation, Muhammad Umar from Gujarat had filed a complaint with the district consumer court judge Fakhar Behzad in February of this year. According to the complaint, Umar had purchased a black color leather jacket from an online company called ‘apni dukaan’. Once the product was received, it did not meet the advertised standard that it was being marketed under.

Using the address available on the website, the complainant shipped the product back based on its defective nature. However he was told by the courier later on that no such shop exists at the aforementioned address. The court summons on the similar address met with the same response leading the court to ask FIA to intervene in the matter.

Court verdict – a tip of the iceberg?

The verdict reads as:

“I have myself taken pain to unearth the truth. The page on Facebook was opened but website did not respond. I have noticed with great concern that a number of fraudulent online stores are working in Pakistan… “

The judge has directed the FIA Karachi to investigate the matter further and reach a logical conclusion for the case. The order has been issued under section 11 of the Punjab Consumer Protection Rules, 2009. A copy of the order is to be sent to the federal interior minister Islamabad, FIA director general.

As e-commerce grows into Pakistan, many such cases may surface. A lot of people getting swindled however end up not going to courts in the pursuit of justice. As responsible citizen it is the responsibility of all of us to continue working towards creating a safer online world for all of us.