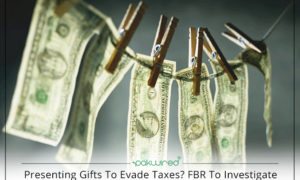 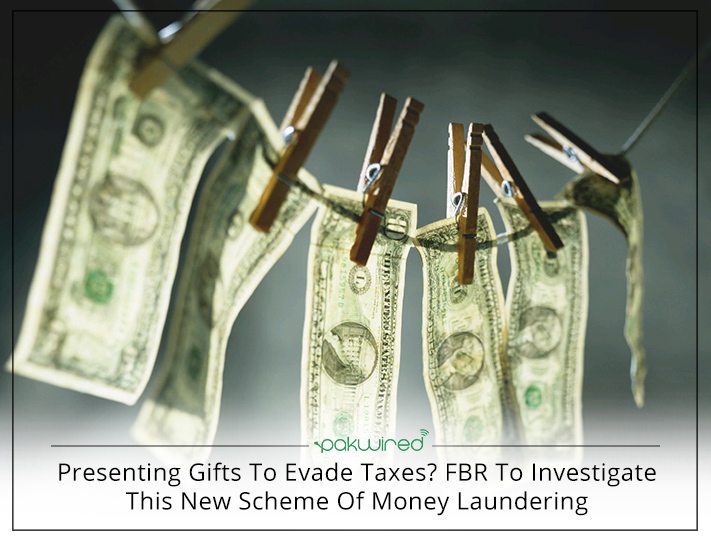 In a latest report emerging from the investigative quarters at the Federal Board of Revenue (FBR), there has been a recent hike in the trend of cash transits as gifts. Deemed as yet another way of laundering money, the presents exchanged between a handful of the rich Pakistanis only during the current fiscal year, amount to a massive Rs102 billion. The authorities maintain reasons to believe that amounts transferred as “gifts” employ the ploy as means to tax evasion.

According to the existing laws, there is no tax imposed on exchange of gifts. One of the top tax officials at the FBR pointed out that this loophole is being used as a tool to safely transfer income, assets and money without paying taxes.

Around 2,785 individuals have transferred amount by claiming it as ‘gifts’ that they got from their relatives, parents or siblings. Investigation reports that these relatives or any other had no identified source of income or were out of tax bounds.

Investigation of tax return filed by the wealthy last year exposed quite a few the money laundering cases garbed as ‘gift’. According to the investigation, minor taxes were paid on the income that was stated in tax returns.

As per the income statement of individuals, in many cases they were claiming hundreds and millions of untraceable money. All this money was put in the gift category while filing their returns, as per the officials.

The Anti-Money Laundering (AML) cell of the Intelligence and Investigation-Inland Revenue has started an investigation to take action against all such ‘gifts’ cases.

The AML cell reported that 2,785 wealthy individuals claimed Rs102 billion worth gift receipts in their income statement in 2016.

Out of these numerous cases, three were reported to have laundered the highest money through ‘gift’. An individual claimed Rs1 billion worth gifts and higher and another individual laundered the highest amount of Rs1.7 billion as gifts. Almost eight people claimed Rs1 billion and Rs500 million worth gifts in their income statement.

Around 2,348 individuals claimed Rs50 million to Rs10 million worth gifts.

One of the tax officials said that AML cell is now investigating sources of these expensive gifts being laundered. Moreover, the cell is also investigating the tax incomes of the senders and reasons behind this money being gifted.

It is relevant to mention that at present not all the cases investigated are found guilty. In many cases, sources of the gifts have been legal as well.

The officials reported that in most of the cases, the total assets gradually rose in income statement over only a few years. These assets did not involve any taxable income whatsoever. The settlements of total assets in such cases were covered by claiming expensive gifts as inflows. But there have been no details about the sources of these gifts being obtained.

AML cell also hailed these cases to decide whether the ‘gift back arrangement’ was being utilized to wash the duty on incomes.

If anyone is found guilty of money laundering, the concerned individual’s assets can be seized according to the Anti-Money Laundering Act 2010. In addition, criminal references can be documented in the Special Court of Customs and Taxation.

Tax evasion laundering through such arrangements is bound to incur consequences with a severe penalty of 10 years imprisonment; seizure of property and heavy fines can also be imposed in addition to the imprisonment sentence.