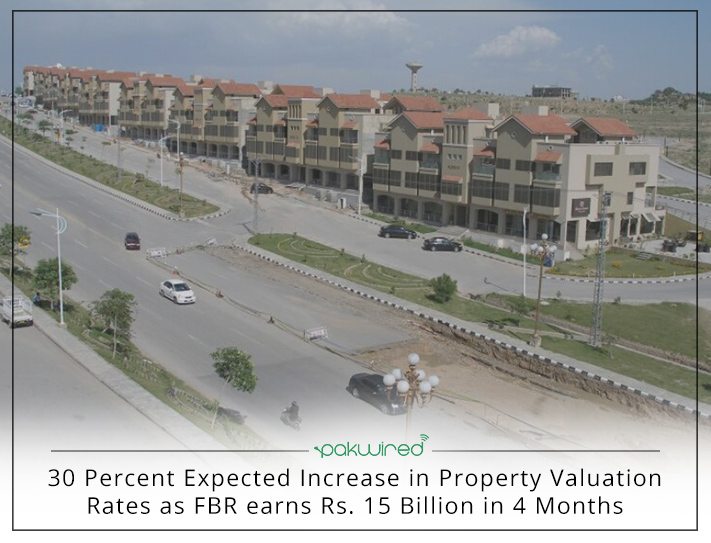 Federal Board of Revenue (FBR), however, remains positive to increase revenue from the real estate sector as its initial attempts have yielded a steady and new cash flow stream, that too from a segment that was once labeled as ‘dead for revenue purpose’.

The increase in property valuation rate for federal tax purposes under first phase have paid rich dividends to FBR. Revenue from the sector increased 100 percent to roughly Rs15 billion as transactions grew one-tenth during Apr-Jul of current fiscal year.

FBR Chairman Dr. Muhammad Irshad on Tuesday talking to press highlighted the future vision of FBR. Under the second phase, the government would notify fresh property valuation rates for major cities by June 30. Rates would go up by 30 percent on average, but these would still be lower than actual prevailing market rates. There is also an expansion plan to increase the number of cities included in the plan from 21 to approximately 30.  The new rates will be notified after the approval of the Finance Bill 2017, added Dr. Irshad.

FBR notified fresh property valuation rates for 21 major cities in August last year. This became a new base for the collection of withholding and capital gains tax – withholding tax rates range from 1% to 3% while the CGT rates are in the range of 5% to 10%.

The plan now is to increase the property valuation rates by another 25 to 30 percent on average.

The tax net can be spread to new cities including Larkana, Khairpur, Shaheed Benazirabad and Okara. Real estate sector has been known as a tricky sector for revenue collection due to parking of black money by various investors. The revenue collections however remained negligible in comparison due to different problems. Now it seems, that all of that is about to change.