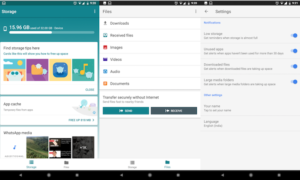 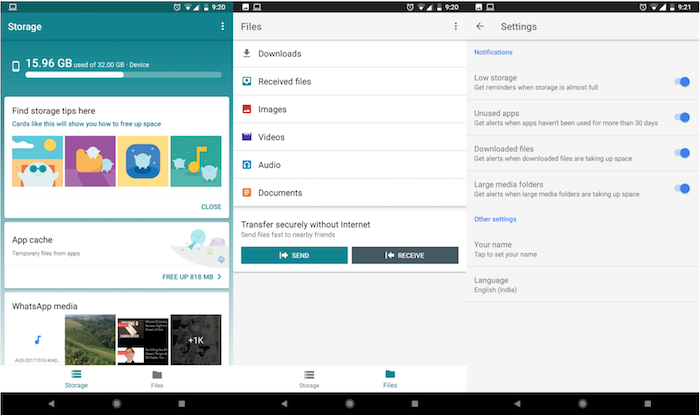 Google is currently working on the development of a new smart file manager app for android which is tipped to reach a billion downloads. Named as Files Go, it’s a free app for android users which will essentially help the users in managing storage smartly besides keeping their phones clean and organized.

On Monday, Google unveiled its app on Play Store only for few hours. However, the time was enough for the users to download the app and upload the APK on dissimilar mirror links. The app lets the users maintain complete control over their files.

Also Read: Google is keen to get rid of fraudulent and unsolicited apps in Play Store

Files Go consists of two different tabs: one for storage,while another for files.

The former category depicts the storage summary of your device. It also indicates the users of their phone’s total space and the remaining space. Moreover, the storage tab will also give the user some advice regarding freeing up some space from the smartphone. You can easily clear the app cache by tapping onto it. In addition, this tab will automatically spot duplicate files, downloaded and large files, and junk media. Subsequently, you can clear them all with just one tap.

On the other hand, the files tab will let the users access their files under one roof. Another pivotal feature of this app is that you would be able to send and receive files wirelessly, even without an internet connection. A user can also control different notification settings on his phone. For instance: this app will send you a notification for those apps which you have not used for 30 days.

Files Go app is likely reach a billion downloads and it is one of the most complete file managers for Android devices.

Quick Read: All AR and VR objects can now be found for free at Google’s Poly library

After a short test run, the tech giant has removed the app from the Play Store for now. However, you can still download the app on your smartphone manually by installing the APK file. The application will be downloaded on any android device which is running Android 5.0 Lollipop or above.