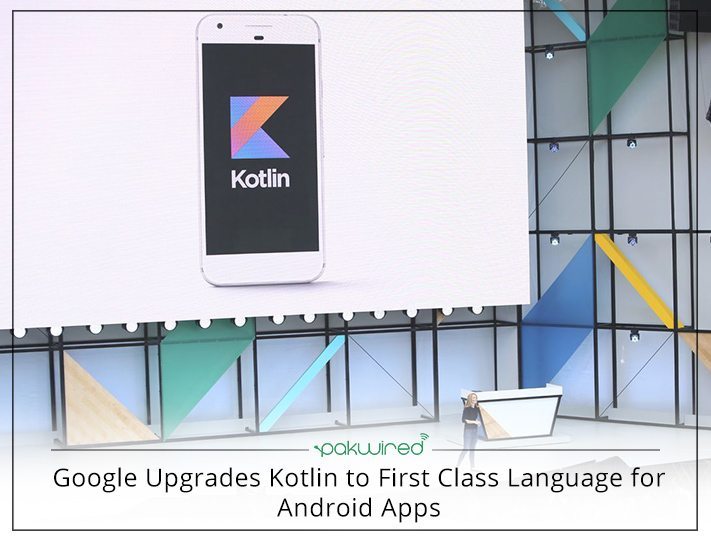 Google has announced that it is adding Kotlin as a first class language for writing Android apps. The announcement came out at the first day of Google’s annual developer conference Google I/O yesterday.

Kotlin a statically typed programming language for the Java Virtual Machine (JVM) continues to grow in popularity with the app makers. The language now joins the first class status languages in Java and C++. Kotlin despite having almost entirely unique syntax of its own is 100 percent interoperable with Java which maintains its dominance as primary language for android apps.

Kotlin’s primary sponsor is JetBrains, the same company which is behind tools like IntelliJ. JetBrains unveiled Project Kotlin in 2011, as a new language for Java Virtual Machine. It was developed keeping Scala (general purpose programming language) in mind but with faster compiling time. The primary objective for Kotlin revolved around mixing quality features of Scala with fast compiling speed of Java. Additional Javascript snippet support and integration with Java Based language were also kept in mind during the development phase of the language.

The first open source project for the language under Apache 2 license was launched in Feb 2012. The first official, complete and bug free version of Kotlin became live in Feb 2015. JetBrains has committed to long-term backwards compatibility starting with this version.

You could already write android apps in Kotlin because of its full interoperability with Java. Now that Google is putting weight behind the platform, the surge in popularity is fully expected. Developers have expressed satisfaction with additional features that Kotlin has but Java does not support.

Google clarified in the keynote speech that Kotlin is being added as an additional language and not a replacement. The announcement of Kotlin being added as the first class support was greeted with the most applause in Google’s key note speech. Something that would go very well with the JetBrains along with many developers across the world!