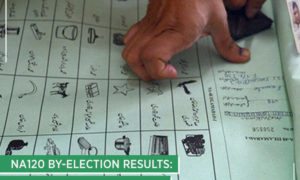 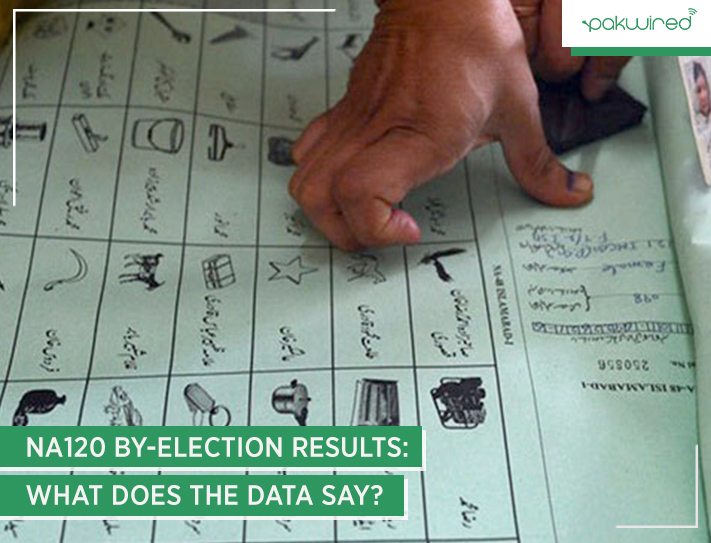 As the fiery by-election for NA120, Lahore, comes to a conclusion, there have been many interesting take aways. According to the data issued by the Election Commission of Pakistan (ECP), as many as 44 candidates including 32 independent and 12 ticket holders of different political parties took part in the bye-election.

Despite the hordes of contesting candidates, only three captured public interest: all coming from the major political parties – PMLN, PTI, and PPP.

Also Read: Is Electronic Voting in GE 2018 a Possibility? Doesn’t Seem Like That

The runner up, Pakistan Tehreek-e-Insaf’s Dr. Yasmeen Rashid, who everyone agrees has made Sharifs run for their lives, secured 47,099 votes.

Historically, PML-N has retained the seat since 1988.

As we have gathered the unofficial numbers, and process a voter trend, interesting insights can been seen in the politics of a definite power centre.

Following voting numbers emerge from the polling results at NA120:

As can be seen, creating a major upset is neither a recognized force, nor even an agenda most people in Pakistan can relate with! It is the Mumtaz Qadri hailing Barelvi sectarian outfit Tehreek-e Labaik Ya Rasool Allah – standing third, in addition to the banned outfit, an internationally terrorist declared organization – JuD’s MML which has claimed the fourth position in the voters preference order.

Also Read: Here’s Why Holding Elections In Pakistan in 2018 May Not Be Possible

As Al Jazeera’s correspondent in Pakistan, Asad Hashim shared his observations, while Pakistan Muslim League-N got 60.6% of the vote cast in 2013, it has gone down to 48.67% in 2017 – only a year before the general elections of 2018.
Two other factors quite significant to comprehend the worth of PML-N vote count, are: (i) In 2013, the seat was consted by Mian Mohammad Nawaz Sharif himself, (ii) In 2017, the PML-N election campaign has been based upon translating the election as a referendum against the judicial ousting of the Sharif.

Against the PML-N figures, in 2017 the Pakistan Tehreek-e Insaf’s vote share has increased modestly by 6.1% of the total votes cast versus those it won in 2013 with the same candidate. PTI lost to PML-N by an undaunting 11.55% of votes cast yesterday. This is a loss Dr. Rashid can actually cheer about considering she had been defeated by a rather convincing 26% previously in 2013.

The PPP has lost another thousand of its already abysmal voter base in the constituency, and has effectively moved to being a non-entity.

There is an alarming drift of the voting trend (over 10% of the votes cast) towards new entrants from the ultra right with decidedly militant leanings. Previously unheard of in the mainstream electoral process, Labaik Group secured 7130 votes (5.62%) making it the third highest scoring party in the by-elections 2017, whereas Hafiz Saeed’s JuD’s fraction MML, got 5,822 votes (4.59% of vote) and stood fourth.

While it should be a cause of concern for the ruling party that there has been a visible shrinking of the winning margin despite their extra efforts to make the by-elections into a crusade between the Sharifs and the establishment; the real reason for concern for the think tanks should be: Where are the PML-N and PPP votes going? Who has come in to fill the gap sufficiently left vacant by the mainstream political parties?

The shift of voter base away from the left and centre in the urban centres of the country becomes a palpable reality, if any trend is to be studied in these results. In a world where hyperextremism is turning into the new world order, are we losing foot or sticking to the script, only time will tell.