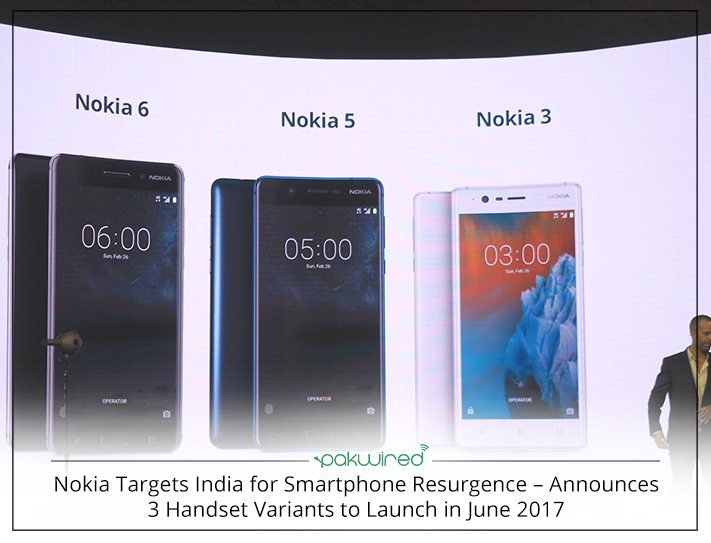 Nokia targets India for smartphone resurgence with the tech company announcing new Anrdoid phones to launch in June. The country seen as a major economic power was also the focus of Nokia’s marketing strategy earlier. India also saw Nokia carry-out the much anticipated rebirth of the iconic 3310, intentionally set with a price tag of INR. 3,310.

The tech company announced the news on Twitter, interestingly as a reply to an inquisitive user. The company responded, “We plan to release our upcoming smartphones worldwide before the end of Q2 2017 (June). Stay tuned for updates.”

Also Read: A Range of Nokia Smartphones To Hit Pakistani Market Within Next Few Weeks

Ever since the announcement of new android phones in 2017 Q1, Nokia enthusiasts have been waiting for the company to reveal exact release dates. While Indian users may get their hands on new Nokia phones, the rest of the world still has to wait further.

An Indian newspaper revealed intricate detail of Nokia marketing strategy in an exclusive report. It claims that Nokia is planning for a phased-out strategy to market the new android based phones. “All three will not be available in one go. Nokia 3 may go first followed by Nokia 5 and Nokia 6. But by end of June, all three may be available in India”.

The Indian market means Nokia will be facing intense competition from already established players including Chinese built handsets that appeal to mid-priced smartphone customers. Nokia has thus ensured that the price of the smartphones remains within a comparable limit to its competition.

Nokia 3 features small 5.0-inch screen with quad-core MediaTek MT6737 processor. The price of this device is expected to be around INR 10,000.

Nokia 6 has a 5.5 inch HD screen with a 16-megapixel camera and Android Nougat software. The price of this device is expected to be around INR 20,000.

The third one, Nokia 5 features a 5.2 inch HD display, integrated with 2GB RAM and 16GB internal storage. The price of this device is expected to be around INR 15,000.

Actual price may vary slightly and will only be confirmed once the phones are launched in the market.