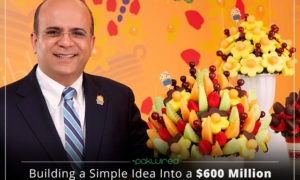 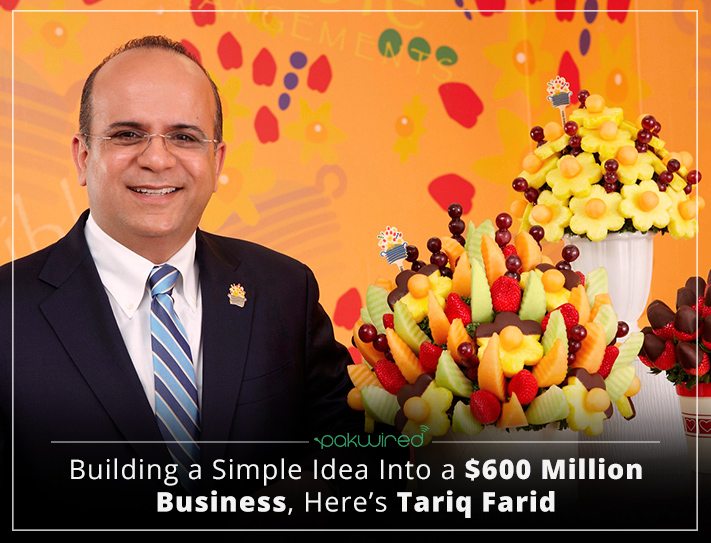 There has been a great number of entrepreneurs in Pakistan with big ideas and the spirit to revolutionize the economy. Despite their hard efforts, however, Pakistan has not been able to produce sky scrapping startups. Struggling with the system restricting progress, many entrepreneurs have ventured to take their ideas out of the country; and have found success in creating million dollar businesses. Here is a similar story of a Pakistani entrepreneur, Tariq Farid who built a 600 million dollar business from scratch.

The CEO and owner of Edible Arrangements, Tariq Farid was born in Pakistan in 1969. Edible Arrangements is Tariq Farid’s own business that specializes in fresh fruit arrangements. He now has more than 1,200 stores in the world and his business is now worth 600 million dollars. The 2016 estimate of orders, alone, has been a whopping 10.8 million orders.

Tariq Farid did not have an aim to build such a big business. He started out by buying a flower shop in East Heaven, a small town in Connecticut in the United States. At the outset, he didn’t even buy this shop with his own money. Instead, he borrowed $5000 from his parents. He was only 17 years old when he started working in his flower shop. At that time, the idea of edible arrangements clicked his mind. He stated:

“Being around flowers, I started thinking about the presentation of food in different displays and, at the time, no one was thinking about scaling or turning it into a big retail business”

All big businesses start off with a small idea. An idea rejected by a lot of people and accepted only by some of them. Same was the case with the idea of Edible Arrangements. Tariq told that when he started to display his idea to people, most of them turned him down. It was said by many people that “people aren’t going to pay for this and it hasn’t been done before.”

Read More: Shoukat Dhanani – An Entrepreneur running one of the largest private businesses in USA

This rejection didn’t let him down and he decided that he should send an edible arrangement to his floral customers and see how they react to it. This idea worked remarkably as he received a lot of positive feedback from his customers. He commented:

“The customers asked, “When can I buy them?” I was inspired by the customers and when someone told me it’s not going to work”

In 1999, Tariq Farid opened the first Edible Arrangements store. Maintaining the business initially was a bit difficult for him. 28 arrangements were ordered on their first Easter holiday and it took them 16-18 hours to manage them. After the submission of their biggest order, the store started to attract more and more people.

After the store gained attention, it was still a small business for Tariq. What proved to be a real game changer for him was when a customer asked him to build a store in Massachusetts, a state in America. At that time, Tariq didn’t have an attorney, yet he told the customer that he would consult his attorney for the matter in hand.

He did all the paperwork and research by himself and learned a lot of things about franchising. He added:

“When I spoke with franchisees I knew what every word meant and that was one reason we were very successful. When I got on the phone, I knew every aspect of the document we were signing and knew why it was there and the purpose of it”

Every big business was once a small one. It took Tariq 17 years to accomplish what he has today. He aims to take his company even further as he is currently dealing with some big companies interested in using Edible Arrangements’ product for marketing. In addition, Tariq has also planned to build 75-100 stores per year.

“Before, everything was a lot simpler, but now you have to build a web presence and a global presence. Along the way, things have gotten very complicated and very expensive”

Focus on the Bright Side

This million dollar business is a great teacher for us that we don’t need millions of dollars of investments in order to achieve our aims. The only thing that matters is the feedback from the customers. When Tariq presented his idea, a lot of people rejected it, but he focused on the positive side and we all can see what it gave him today, a $600 million business.

Quick Read: Tale of Sialkot Entrepreneurs building their own city is inspiring

A question that might click all of our minds is that if he started his business in Pakistan, would he have achieved what he has now?