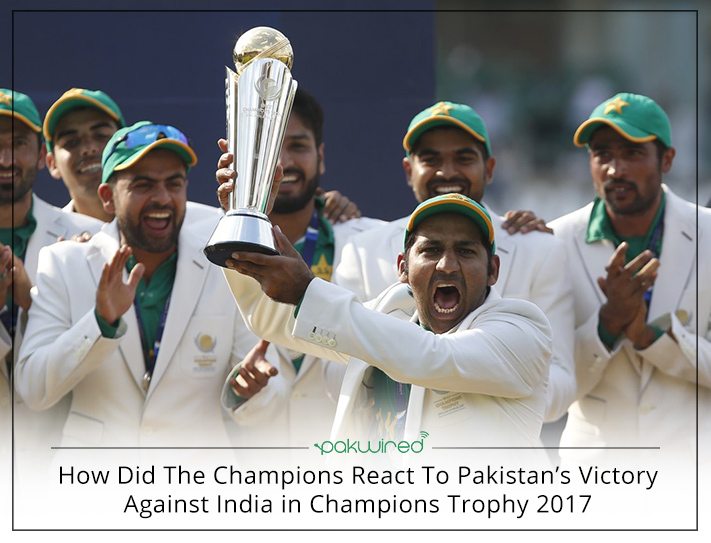 A roller-coaster tournament i.e. Champions Trophy 2017 has finally come to an end. In the final match of the tournament, the two Asian giants, India and Pakistan met each other for the second time in the tournament. Unsurprisingly, Pakistan managed to win the match quite comprehensively in a visibly one-sided match as they thrashed India by an astounding margin of 180 runs.

As soon as the match came to an end, or dare I say, even before it had come to an end, Pakistan Cricket team managed to get plenty of appreciation from current and former cricketers all across the globe. The cricketing world at Twitter was full of praise for Sarfraz and his men who performed outstandingly well to outplay India in all three departments of the game.

I have compiled some of the best tributes and they are here:

Congratulations @TheRealPCB, the team & the whole country for such a great win.#CT17. Boys you made us happy & proud. Up & above 4rm here!

What a comprehensive win! Well done team Green so so so proud of you #pakistanzindabad 🇵🇰🇵🇰🇵🇰

Brilliant from Pakistan! Embraced aggression, freedom in play. Youth and experience all stood up on the biggest stage! Great scenes.

Congrats to @iamamirofficial and the Pakistan Team!! A great win for them and their country #CT17Final #Champions 🏏 🏆

Love you Pakistan team we just love you ..proud moment for every Pakistani .. pic.twitter.com/r41pyD3xLI

Special scenes at The Oval. Wonderful cricketing venue. Awesome performance from #Pakistan #CT17 much deserved. What a spell by Amir up top

Wow wow wow unbelievable performance by team green. It feels like deja'vu after winning the 1992 WCup. I am over the moon #PakistanZindabad

This performance will be remembered long by both Indian and Pakistani fans :) Pakistan 've made this #CT17 truly memorable

Congratulations @TheRealPCB How good have they been to watch .. thoroughly Deserved it !! Saved the best for last too.. #CT17 Well done !!

Not predicted , unexpected but thoroughly deserved win for @TheRealPCB. @SarfarazA_54 and Mickey Arthur and the team should feel so proud

Congratulations to Pakistan team on a deserved win..tough luck to the Indian team #CT17 #PakvsInd

Wow congrulations to Pakistan on winning the #ct17 no one gave them a chance, but here they are well deserve Champions.. #PakistanZindabad

A huge congrats to the Pakistan Cricket Team for winning the 2017 Champions Trophy. An incredible achievement#championstrophy

Egg on my face Pakistan … but delighted to have been proved wrong … Fantastic Cricketing country and your team have been outstanding ..

Do you have anything to say to Pakistan Cricket team? Let us know your sentiments in the comment section!