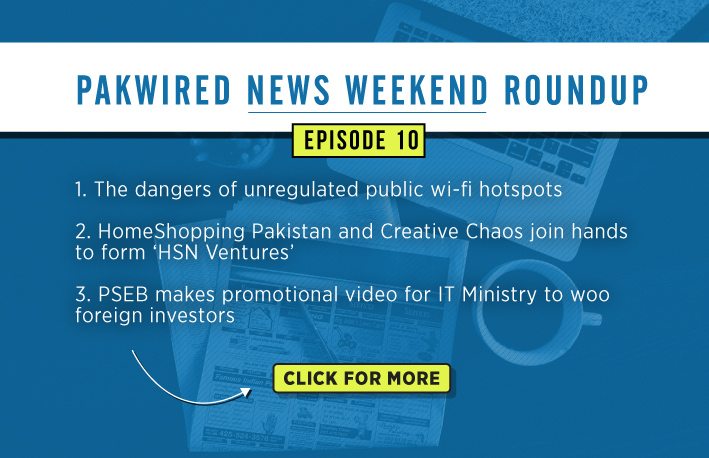 Merry Christmas and happy holidays to our Christian readers! We would also like to extend our joy on the birth anniversary of Pakistan’s founding father, Mr Muhammad Ali Jinnah. Quaid-e-Azam Zindabad, Pakistan Paendabad! :)

Summary: We covered Pakistan’s Telecommunications Policy 2015 two weeks ago. Our latest featured article focuses on the Government of Pakistan’s plans to establish free public wi-fi hotspots in important urban areas as part of its Universal Service Fund (USF). What sort of security risks can be associated without proper implementation of communication and safety protocols? We share some Human Security, Cyber Security and Health Hazard concerns. Click here to read.

Summary: Shayaan Tahir of HomeShopping Pakistan and Shakir Husain of Creative Chaos have joined hands to merge into a unified deal in the form of HSN Ventures. The deal will give this new joint venture complete ownership of HomeShopping Pakistan. Interestingly, Mr Tahir will still retain majority stakes in HSN Ventures. He will manage operational aspects whereas Creative Chaos will focus on new product development (business development). It’s worth mentioning that Mr Husain has considerable experience working with global e-commerce organizations including eBay and Groupon, to name a few.

Summary: The Pakistan Software Export Board (PSEB) is in a very optimistic mood regarding the breadth of potential available in boosting Pakistan’s booming IT industry. The team recently launched a documentary video for the Ministry of IT & Telecommunications (MoITT) highlighting Pakistan’s achievements so far in this crucial sector, which has largely been overshadowed because of India’s sharp rise as one of Asia’s largest ICT hubs. The video, almost 7 minutes in duration, aims to attract foreign investors’ interest in the country’s market potential by citing prominent achievements and sharing industry statistics with respect to expected rise. It is well known that Pakistan has a thriving freelance community comprising experts in areas as diverse as application development, graphics designing, multimedia animation and software programming, to name a few. Click here to watch the video.

Summary: 13 emerging startups from the second batch at The Nest I/O, renowned technology incubator of Pakistan Software Houses Association for IT & ITES (P@SHA), have successfully graduated. In this regard, a formal ceremony was held on December 19 to introduce these successful projects to the local media. Ms Jehan Ara, President of P@SHA, expressed her optimism and confidence on Pakistan’s still-untapped potential waiting to be explored and encouraged through the provision of proper resources and mentorship. The list of graduating startups are as follows: Hireonic, MandiExpress, Wondertree, Rateker, RentMyCar, T7M, KheloCricket, Everee, Inferential-S, WPJIT, IOTechnica, Daakhla and eTuitionHub.

Summary: Mr Muhammad Atif Khan, Minister of Education for Khyber Pakhtunkhwa (KP) province, revealed on December 24 that global technology giant Microsoft offered a free certified course to train 15,000 IT teachers in government schools across the province. This offer would save the KP government a cost of Rs. 30,000 per head otherwise. Mr Khan said the training would begin in Summer 2016 while students would be trained in the second phase. He emphasized it was part of the provincial government’s plans for promoting a knowledge-based economy through digitization of curriculum in government schools through collaboration with local and international IT companies.

Summary: Facebook CEO Mark Zuckerberg had written on his personal page that books allow individuals to explore a topic and immerse themselves “in a deeper way than most media today”. To share the extent of his enthusiasm for book reading (in print), Zuckerberg launched a book club called ‘A Year of Books‘ in which he talks about the books he’s currently reading with fellow colleagues at Facebook. Some of his selections include World Order by Henry Kissinger, Portfolios of the Poor: How the World’s Poor Live on $2 a Day by Daryl Collins, Jonathan Morduch, Stuart Rutherford, and Orlanda Ruthven and The Muqaddimah by Ibn Khaldun. These could make for a good reading spree for young entrepreneurs who are inspired by Zuckerberg’s quick shot to stardom. Click here to see the complete list.

Summary: One of the world’s largest e-commerce website, China-based Alibaba, reportedly has plans to invest $1.25 billion in Ele.me, a food delivery service based in Shanghai. Once the deal is finalized, it will boost Alibaba’s 020 (Online-to-Offline or Offline-to-Online) strategy by which online customers are persuaded to spend money in offline businesses and similarly the average market shoppers are encouraged to purchase items online.

Summary: After Google, Facebook and Twitter, now Yahoo will also warn users about imminent state-sponsored cyber attacks (basically letting users know if state governments were trying to snoop in or hack their IDs). Bob Lord, Chief Information Security Officer at Yahoo, wrote in a blog post that early warning notifications by his company would enable users to increase security measures on their account. Yahoo has so far declined to share further details about how it would detect such intrusions beforehand. On the other hand, it has advised users to ensure that its messages are not being secretly forwarded elsewhere.

Summary: Yes, you heard that right. As outrageous and bizarre it may sound, the social media giant has actually applied for a patent to enable UAVs (drones) to take photos/videos and transmit them through Twitter user accounts. Examples may include user facility to control the drone through likes, retweets and replies. Bear in mind that earlier this year, Twitter had launched Periscope, its live streaming app. So can we expect Twitter users to openly record and broadcast live events through drones flying overhead? Maybe during uprisings/protests/demos or even concerts? The possibilities seem endless! When approach for a comment on this development by CNBC, a spokesperson for Twitter simply replied, “Two words: drone selfies”.

Summary: On December 18, Facebook announced that all videos hosted on its website now play through HTML5 technology by default. This comes amid reports that Adobe decided to axe Flash because of growing concerns over its frequent vulnerabilities. Daniel Baulig, Front-End Engineer at Facebook, wrote that the shift in platforms took time because of rigorous testing to fix small bugs. Besides its high-end security and optimal performance, Facebook said that HTML5 technology makes its network experience better for everyone.