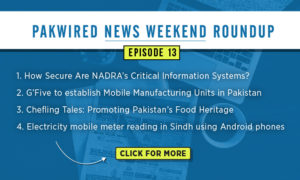 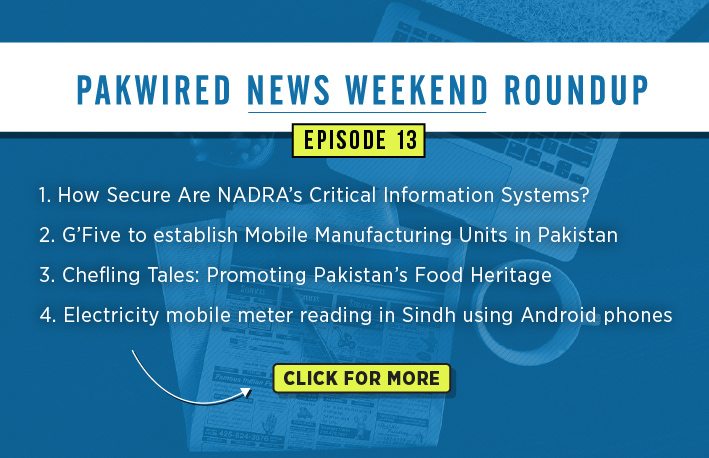 Hello dear readers! How is the New Year going for you all so far? We have an exciting roundup of news for you this weekend! We’d appreciate your feedback on this effort of ours to keep you abreast of the latest technological developments within Pakistan and abroad, as best summarized as possible. Your valuable feedback will mean a lot! :)

Summary: The National Database and Registration Authority (NADRA) operates under the Interior Ministry and is responsible for maintaining some of the most sensitive information in the country i.e. complete biodata of Pakistani citizens. In the age of cyber threats, how effective has NADRA proven to ensure its credibility in securing its critical information systems from malicious elements? Did any breaches take place in the past? Click here to read our special report.

Summary: After Haier, G’Five has also approached Pakistan Telecommunication Authority (PTA) to obtain a No-Objection Certificate (NOC). The company plans to establish a mobile manufacturing units in Pakistan. G’Five is a Chinese electronics company which is registered in Hong Kong. Its products at aimed at penetrating markets in emerging economies. This development comes amid the IT Ministry’s attempts to woo international telecom manufacturing companies to set up local production units either through Public Private Partnership (PPP) or otherwise. In April 2015, G’Five Pakistan President Mr Abdul Rehman had announced the company had already become the first mobile manufacturer in Pakistan.

Summary: Food blog startup Chefling Tales has a vast repository of traditional Pakistani foods from Punjab, Sindh, Baloch, KP and Kashmir, delicacies which have been prepared by every succeeding generation. The startup’s slogan is “Every Recipte has a Story”. Besides local food, the website also has an assortment of recipes from Lebanon and Asia. Users wishing to share their own reciptes can drop an email to cheflingtales@gmail.com. The startup was founded by Madiha Hamid.

Summary: The federal government in Islamabad has introduced mobile metre reading through Android smartphones in Sindh, after an successful implementation in the twin cities of Rawalpindi/Islamabad. Metre readers will be required to report for reading in rural Sindh every month. It is hoped that the introduction of this technology will significantly improve unit collection capabilities. Android-enabled mobile metre reading has already been initiated through Sukkur (SEPCO) and Hyderabad (HESCO).

5. IT Ministry and PSEB organize workshop on ICT development

Summary: The Ministry of IT & Telecommunications (MoITT) and Pakistan Software Export Board (PSEB) organized a one-day workshop at National IT Board in Islamabad to showcase the effectiveness of ICTs for development. Professor Tim Unwin, UNESCO Chair for ICT4D (ICT for Development) delivered the keynote address. The workshop was based on four sessions: local content development, international research collaboration, competition policy and emerging business models. It was attended by members of PSEB, National IT Board (NITB), MoITT personnel, guests from other ministries, private IT and telecom companies and academia.

Summary: German authorities have launched an Android app called “Ankommen” (“Arrive”), which includes a basic German language course, asylum application guidelines, job / vocational course seeking modules. It is available in 5 languages (Arabic, English, French, Farsi and German). The app has been developed through collaboration between the Federal Office for Migration and Refugees, Federal Employment Agency, Goethe Institute and Bayerischer Rundfunk. An iOS version of the app is also in the pipeline.

Summary: An alleged teenage hacker who infiltrated CIA Director John Brennan’s personal email ID last year in October, appears to have successfully targeted another US spy chief. This time, he managed to break into the personal email, home telephone/Internet and wife’s Yahoo account of James Clapper, US Director National Intelligence (DNI), legally the highest ranking spy chief in the US who oversees the entire Intelligence Community and reports directly to the President. The hacker, reported to be part of the “Crackas With Attitude” group of hacktivists, also forwarded all of Clapper’s home calls to Paul Larudee, Co-Founder of the Free Palestine Movement.

Summary: Skype has announced that a new, mobile group video calling facility will be available for its users in “the coming weeks” for Android, iOS and Windows 10 Mobile. Users who are too excited can pre-register on the 10th anniversary portal of Skype to test its beta version. The new service will allow 25 people to simultaneously call on desktop and 10 people to share a video call.

Summary: If rumors are to be believed, global ICT giant Microsoft might be planning to unveil the Lumia 850 and “Lumia 750” at the Mobile World Congress (MWC) next month. According to leaks, Lumia 850 has a 5.7″ 1080p display, a Qualcomm processor and 2 GB RAM whereas details of the “Lumia 750” (model number not confirmed) are yet unavailable.

Summary: Bryan Stolle at Forbes has put together a list of 8 key startup lessons learned during 2015. He compiled comments from his entrepreneur network who are senior authorities in leading companies ranging from enterprise cloud software firms to direct-to-consumer online companies. These lessons will prove resourceful for young entrepreneurs who could use some of the best professional advice to refine their marketing and strategy development skills. Click here to read.