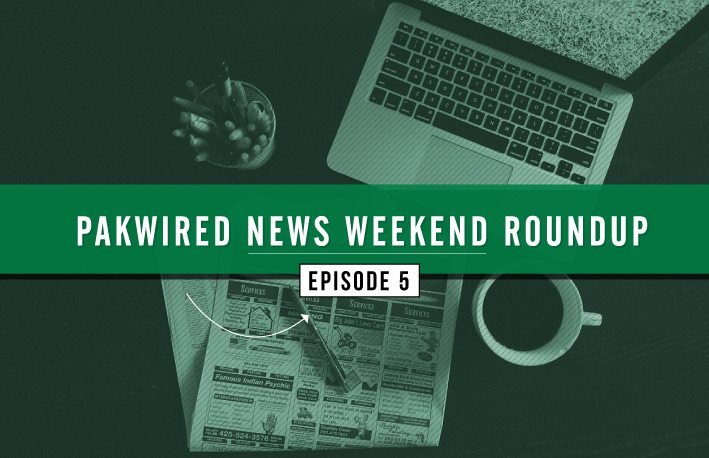 Hello everyone! Pakistan’s entrepreneurial scene is picking pace and local infrastructure is also poised to transform significantly. There’s some ‘not good’ news for Windows phone users though (sorry folks!). We’d love to hear your feedback on our initiative to provide you with a weekly news roundup so do let us know what you think by comments below or send us an email to pakwired[at]gmail[dot]com. Happy reading! :)

Summary: US-based non-profit policy and research body Internet Society (ISOC) released a special report during the INet Conference held in Islamabad on November 17. The report highlighted Pakistan’s potential to become the hub of Internet connectivity in Central Asia because of its “enviable strategic position”. The country currently has the highest Internet speed rate when compared with landlocked Central Asian Republics at 400 Gbps. However, the report did mention that the current rate of progress is going at a very slow pace and if the lack of attention continues, Iran might supersede Pakistan to take the coveted slot. At PakWired, we believe this report should be an eye-opener for the IT Ministry and adequate, timely steps should be taken to ensure we don’t miss out on this key opportunity.

Summary: Most of you will be familiar with the Internet startup Hometown Shoes which later renamed itself to “Markhor”. It’s a startup venture making the rounds for its high quality customized shoe manufacturing. “MONT5” deals in traditional craftsmanship by removing the need for unnecessary middlemen. Like Markhor, it empowers the craftsmen while giving them international exposure to a wide array of clients. Their claim is high quality and, to establish their credibility, each product has a LIFETIME GUARANTEE! The project, brainchild of Mr Zia Ghafoor, aims to provide quality handmade leather jackets to its customers. You’ll be interested to know its items are named after renowned peaks and locations in Pakistan’s northern areas such as “Rakaposhi”, “Deosai”, “Naltar”, etc. A Kickstarter campaign which has so far managed to collect over $32,000 (till the publication of this roundup) can be viewed here, with all relevant details.

Summary: “doctHERs” is a startup founded by Dr Asher Hasan of Naya Jeevan fame (2011 Entrepreneur of the Year at the World Economic Forum) and a group of female medical professionals who’ve come up with an innovative technology solution, making it possible to connect them and other medical doctors with people situated in remote rural areas of Pakistan. Their ambitious venture sounds similar to Jaroka, a tele-healthcare app based in Stanford which we covered in Episode 3. The startup was co-founded by Dr Sara Saeed Khurram (Project Director). Its objectives also include training community health workers or midwives to connect with the DoctHERs team through video conferencing and other Internet-enabled technologies. The ultimate objective is to provide easy and affordable healthcare facilities to the under-privileged citizens of Pakistan. Kudos to the team for winning first position in the ‘Women-led Startups’ category at MIT Enterprise Forum Pakistan’s Business Acceleration Program and subsequently securing a place in the Entrepreneurship Development Program at MIT Enterprise Forum!

4. Pakistan’s First Internet Exchange Point Being Set Up In Islamabad

Summary: Like many of you readers out there, we at PakWired too are fedup of the occasional Internet speed and connectivity issues, especially on PTCL Broadband. Not everyone can afford getting Zong 4G services since even fewer people actually keep 4G-enabled smartphones. The good news circulated by Aamir Attaa of ProPakistani is that PTA has partnered with ISOC to setup Pakistan’s first Internet Exchange Point (IXP) in Islamabad and the dedicated service, reportedly, is expected to begin in two months. Let’s hope this process witnesses early completion. The plus side of this development is that the connectivity is expected to significantly improve whereas the downside of it is the possibility of direct, easy surveillance by state agencies. Let’s wait and see how the development progresses.

Summary: Facebook recently released a report with briefs about the months in which various governments around the world requested information from Facebook authorities for crime and terror-related investigations. Facebook has emphasized they scrutinize every application very carefully and only assist governments when they are fully satisfied about its legitimacy. A brief report on Pakistan showed the federal government had made 192 requests for information sharing during the period January-July 2015.

Summary: MIT Technology Review Pakistan published a very interesting report by Hafsa Shorish, former Marketing and PR Manager for PITB’s tech incubator Plan9 and currently Program Manager for PlanX. The report explores the current export contribution by freelancers ($850 million) and the growing market potential to increase this to around $1 billion within a few months. The author points out that thorough mentoring and proper market guidance can help these freelancers channelize their productivities in the right direction. She pointed toward the need for official support to freelancers to connect together in co-working spaces. Click here to read the full report.

Summary: Jack Ma, Founder and Chairman of the world’s largest e-commerce market Alibaba, delivered a short but powerful 15-minute speech at the Asia Pacific Economic Cooperation Summit in Manila recently. The entrepreneurial genius offered frank insight into his venture’s humble beginnings and the secret behind his determination for success. We reported in Episode 4 that Alibaba broke records by earning a whopping $14 billion on Singles Day (November 14) alone. Perhaps the most powerful statement by Ma was that trade is a basic human right and people should be free to engage in it instead of using it as a tool for subversion. Judith Balea at TechInAsia picked out 12 of his best quotes (statements, rather) at APEC 2015. Click here to read them. On a related note, President Obama was so inspired by Ma that he broke official protocol and directly interviewed him in a casual manner.

8. Has Microsoft Scrapped Plans For Android App Emulation In Windows?

Summary: It seems like Microsoft is bent on depopularizing its Windows phones. If incoming reports are to be believed, the IT giant has apparently decided to revert from its decision made earlier in April 2015 to enable Android apps on Windows. It’s said that development work on iOS porting tools is still underway. What could be the reason for this discrimination? We’re not sure. What we are certain about is that on our side of the world (Pakistan, Asia), Windows phones aren’t really popular and being one of the fastest growing Internet and mobiles market, Microsoft risks losing a considerable share in Asia. Android is given preference in Pakistan, India and East Asian states as compared to iOS which mostly has loyalty from the privileged classes. There’s also no doubt that Android offers far more diversity in its apps and tools than iOS does. We don’t like where this is going, we hope Microsoft sticks to the earlier commitment made by Windows chief Terry Myerson.

Summary: Chinese tech giant Huawei has showcased models of two lithium-ion batteries which can recharge in just a few minutes using a bespoke charger. The higher capacity battery model developed by Huawei can charge mobile power by 48% is just 5 minutes and provide up to 10 hours of talk time. Click here to watch a video demo.

Summary: At the end of this week’s roundup, we leave you with a list of 20 SEO professionals on Twitter who are masters of their craft in their own right. Pakistan’s freelancer community includes the thousands of online content marketing professionals who are always on the lookout to improve their rankings and visibility on search engines, primarily Google. The World Wide Web is an open market, free for all, with vast opportunities to display your offering. If you’re an SEO enthusiast and need expert advice from the big names, click here to browse the list curated by Leigh Haugh for Global Liberty Voice.