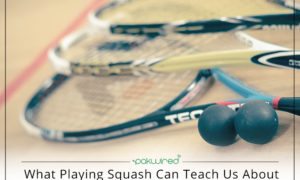 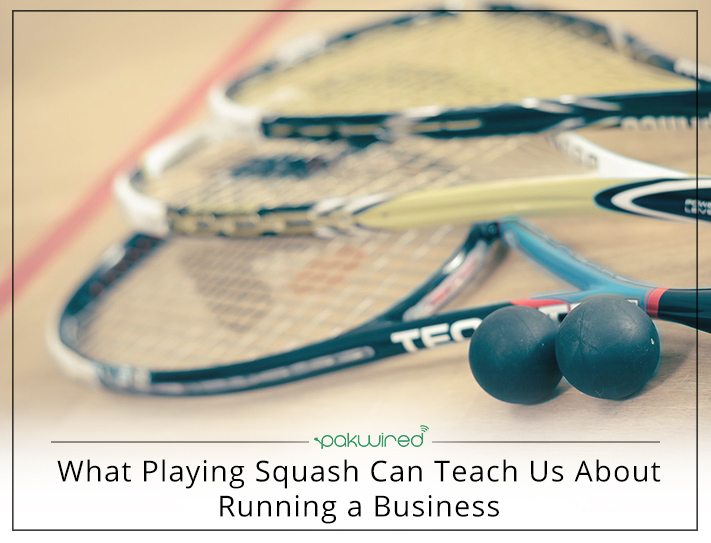 Though most Pakistanis would choose Cricket as their favourite sport, I would side with Squash. Cricket is a great game but since childhood I always enjoyed playing squash. After a hiatus of over a decade, I recently started playing squash again on a weekly basis. Since the last time I played was in my teens, my perception and understanding of the game has changed drastically. Asides from the obvious health benefits, I’ve realised how it can teach a few things about running a business.

Jahangir Khan dominated the worldwide squash profession in the 1980s so most Pakistanis will have seen a squash court on TV if not in real life. The common set up is three cemented walls with a wall of glass which houses the door to the court. Looking from the outside in, it always seems a lot smaller than it is.

Looking From The Outside In

Before playing, its common to turn up early for some stretching and normally watch the last few games of the users who’ve booked the court beforehand. When watching these guys play, for someone who loves the game, it’s an exhilarating experience. The way they move swiftly and anticipate every move carrying rallies for what seems like hours. Watching these guys is good experience — you can learn a few new tricks as well setting yourself some goals because ideally you want to play at their level.

Lesson one: Before starting, watch and learn from the people who are already there before you.

As mentioned, looking from the outside in, the court seems small but as soon as you enter, its another story. With courts having no ventilation, they are stuffy due to the perspiration and heat of the previous users. The size is a surprise, some may say intimidating — much larger than expected. But its time, once in you have to play the game or risk upsetting your partner.

Lesson Two: Don’t underestimate the game or the environment you’ll be working in. Learn about it but don’t make assumptions.

The nature of the game will always dictate the speed and squash is an extremely high-paced game. Skill and expertise has a lot to do with it but very rarely do you control the speed — this will normally depend on your opponent and how they react to each play you throw at them. This also means you have to be prepared for what they throw at you.

Lesson Three: You can’t always control the speed and nature of the game but you can focus on your game so you are ready for what is thrown at you.

Over the course of the game, there will be many times where your opponent will be in a position which is nearer to the front than you and often they will block your vision of play. Whether you’ve played the opponent before or not, one has to learn to identify movements which indicate where your opponent will hit the ball. What way is their body facing? How far open is their arm when hitting the ball? etc.

Lesson Four: You competition may be in front and it will be difficult to see what they are doing, but learning to understand their tell-tale signs can help you predict what to be prepared for.

The converse to the above is when the opponent is behind. When this happens, it is very rare that you get a chance to look back and see where they’re hitting the ball, if you do, chances are the ball will be out of play before you can turn back around. So again, here you must learn to play the game of anticipation. In a split second you have to calculate where you have hit the ball and where the highest probability of the ball being returned is. Alongside this, listening to where your opponent is moving and how hard the ball is being hit can help narrow this down.

Lesson Five: You’ll be at the front with your competition at your heals. Looking back will slow you down, so learn to listen to indicators that will guide you to their play, but always keep looking forward.

Due to the high-speed nature of the game, the slots booked on a court tend to be around 40-50 mins per slot. Though it doesn’t seem like a lot, if you’re not a professional, playing at a constant high-speed for this time is gruelling. The lack of ventilation and stuffy environment don’t make things easier but you have to learn to survive in the abnormal atmosphere for the length of time required and continue playing to the best of your ability.

Lesson 6: Things will get hot, sweaty and uncomfortable but you’ve got to stick to it, adapt your style and game to survive. After all, it’s the survival of the fittest.
Concluding Thoughts

Squash is just one of many activities we can draw inspiration from. At its core, business ties in closely with a lot of the things we do. What lessons/tips can you learn from the activities you do?