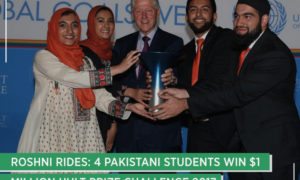 The trend of Pakistani students bringing laurels to the country continues. This time, 4 Pakistan-American students namely, Gia Farooqi, Hanaa Lakhani, Hasan Usmani, and Moneeb Mian have won this year’s Hult Prize Challenge in New York. In adiition to the title, they have also won a colossal amount of $1 million. The winning project revolved around empowering the refugees across the globe with a transportation network. The idea has been named as Roshni Rides.

What is Roshni Rides?

The idea of 4 Pakistan-American students is somewhat similar to the New York subway system i.e. to launch a rickshaw shuttle service. Primarily, the service will be used to provide relief and economical transport service to the refugees who reside in the densely populated urban regions in the South Asia. It is pertinent to mention that in this part of the world, it generally gets hard to find an affordable ride. The rickshaw shuttle service would also enable expatriates to travel to schools, institutes and other areas of interest without any difficulty.

One of the team members, Gia Farooqui said:

“America is diverse and looks different. Anybody can help anybody, no matter what you look like”

The model of Roshni Rides has been developed in three streams. Initially, there are going to be established ‘Roshni Stops’ at schools, hospitals and markets. Users are then provided pre-charged cards so that they can pay for the rides. Roshni Rides is determined to utilize this model to cut the down for the users.

All the participants presented their idea in front of renowned industry experts, leaders and a panel of judges. Once the presentations got concludes, the partner of Hult Prize Challenge and former U.S. President Bill Clinton declared Roshni Rides as the winner of the challenge.

He lauded the efforts of the team and stated:

The team plans to use $1 million to introduce Roshni Rides for refugees in Pakistan too.

Hult Prize Challenge is a competition for entrepreneurs. It was initiated by the Hult Prize Foundation which is a not-for-profit firm for social enterprises. The event this year took place at the headquarters of UN in New York. Over 50,000 people from more than 100 countries participated in the competition. After several stages of competition, six finalists including Roshni Rides were selected.