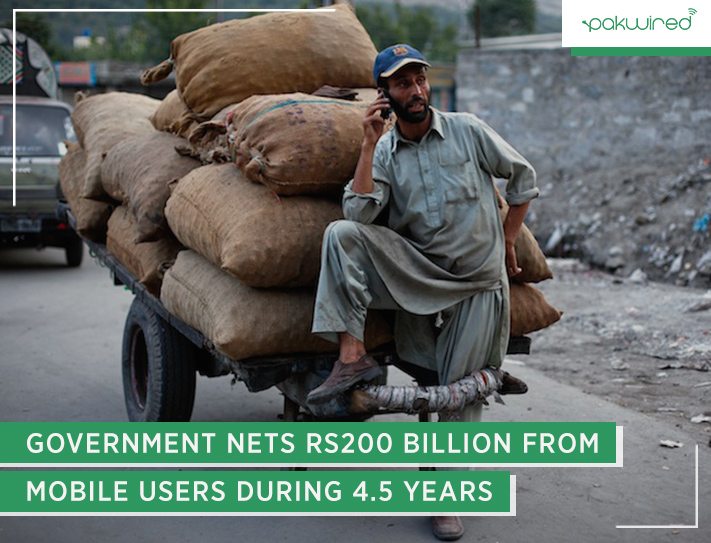 According to the data released by Ministry of Information Technology & Telecommunication, the Government of Pakistan has collected a mammoth sum of Rs200 billion as taxes from the mobile phone subscribers in a period of over four years.

The yearly break-down of the taxes during the last 5 years is as shown in the following chart:

According to the data released by the ministry, the telecommunication companies formerly issued a lump sum tax figure which used to get deducted from all the users on board. Later, the reported figure was used only for verification, that too, to an extent of deposits in the national exchequer.

Also Read: Own and use a mobile phone in Pakistan for $2.21 a month

The IT chapter of the Federal Board of Revenue (FBR) – Pakistan Revenue Automation Limited (PRAL), in discussion with the telecommunication companies has shaped a utility which will bids Telcos to upload the consumer wise data in a jointly decided format. With the necessary intervention of PTA, the Telcos have agreed to upload a consumer wise data in the new format from August 2017.

Two Telcos have uploaded the data

At present, two cellular companies, M/s Pakistan Mobile Communication Limited (PMCL) (Jazz) and M/s Pakistan Telecom Mobile Limited (PTML) (Ufone) have already uploaded their data as per the new format. The other two operating mobile companies, M/s Telenor Pakistan (Pvt) Ltd and M/s CM Pak (Zong) have not uploaded the data yet. Consequently they have been asked to submit the data at the earliest.

It is noteworthy that the data which Pakistan Telecom Mobile Limited (PTML) has uploaded in the new format, contains some errors. PRAL is currently in talks with PTML for the removal of submission errors.

The uploading of the new software has enabled the Telcos to provide customer wise information of the mobile phone including easy loads and calling cards during the month. The concerned tax office will then cross-match the obtained information with the tax deposited by the Telcos.