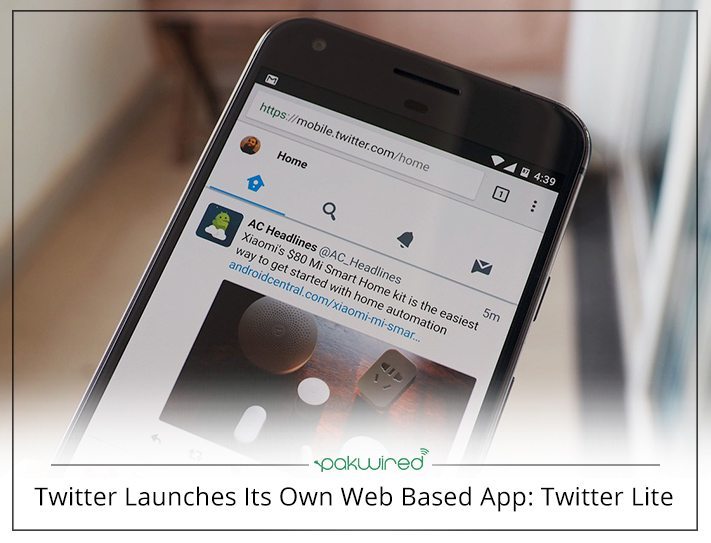 Like other applications, the lite version of Twitter is named as Twitter Lite. However, one thing that differentiates it from the others is that this app is browser-based. The app can be used by visiting this site, using any browser. This is a data optimized version of the app and Twitter claims that it will work well and fast for those people with limited internet connections. Right now, hundreds of millions of people use the Twitter app; but Twitter is deciding to take it up a notch through introducing a data optimized version of it.

Also Read: Twitter announces new process for those who are seeking verified accounts

Even though a web app is not as much powerful as a native app, Twitter believes that a web based version of its app will attract more users towards it. Twitter said:

“It works on most smartphones and tablets without an App Store or Google Play account. You won’t need an email account or credit card either”

The main feature of the app is that it is ‘storage-compatible’ with all phones. The app is only 1MB in size. In addition, it also supports push notifications for Android and offers an icon for the home screen.

Quick Read: What does the Rocket Icon launched in Facebook app mean?

Twitter’s success as a social media platform has been nowhere near to that of Facebook. The Lite Version of Facebook alone counted 200 million users after the first two months of its launch which is very close to Twitter’s overall user base i.e. 319 million users. On the other hand, Facebook has a monthly user base of 1.86 billion users.

The main country where Twitter has been unsuccessful is India. According to a report by the Internet and Mobile Association of India, the online population of India is expected to reach 450-465 million people by the end of June 2017. However, the same reports show that the percentage of Twitter users in India is less than 20% out of the total percent of social media users of the country.

In order to get users from India, Twitter has reached out to Vodafone. With 177 million subscribers, Vodafone is likely to promote Twitter to each and every social media user in India.

“No matter where you are in the world, we want to make Twitter the best way for you to get real-time updates on news, sports, entertainment, politics, and other topics that matter most to you”

Back in 2009, Facebook released the Lite version of its own app. It was that time of the year when people expected Twitter to do the same. The application was developed last year by a team of Indian programmers but the release had been postponed. However, the answer to why Twitter took so long to release a Lite version of its app is still a mystery.