“In 2015, Karachi went through a heat wave and more than 1200 people perished because of it. Karachites in general are resilient and very accustomed to hot weather. But this time round the heat was relentless, leading to the horrific death toll. The city ran out of places to put dead bodies. They were lined in large halls at the Expo Centre and other open spaces.  Mass graves were dug to bury unidentified bodies,” recalls Shahzad Qureshi.

A textile engineer by qualification and entrepreneur by vocation, Shahzad runs two businesses in Karachi and did not think of himself as an environmentally conscious person. But all that changed after that deadly summer. He decided that not doing anything to change matters was no longer an option.

“Urban Heat Island (UHI) effect already had reduced the average rainfall of Karachi seriously, and now this! Around this time, I came across a video explaining how the Miyawaki method helps create forests in a very short period, with only native species and without any help of chemical fertilizers and pesticides. I immediately jumped on this idea, invited a consultant and created our first pilot in December 2015.” 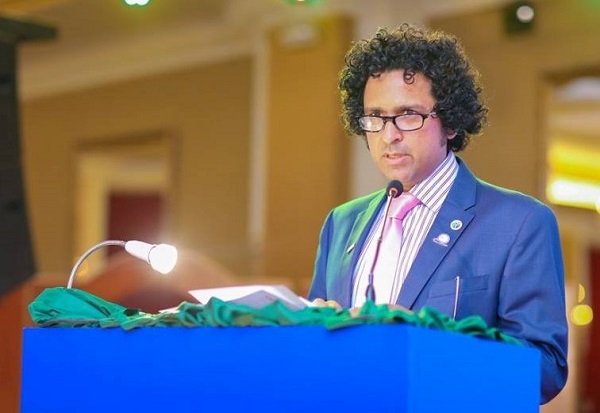 Shahzad is referring to Japanese botanist Akira Miyawaki’s pioneering technique of afforestation where trees grow ten times faster than the natural pace, creating forests within two to three years as opposed to a hundred.

UHI effect takes place when an urban area is significantly hotter than it’s surrounding rural areas because of human activity. Be it deforestation, waste heat generated by energy usage or any of the other unsustainable methods used by governments to address the needs of an ever-growing population, human interference wreaks havoc with the natural climate of the area. The landscape absorbs more and reflects less heat during the day. At night it releases the additional heat back into the environment.

The UHI effect in Karachi has progressively become worse over the years, climaxing in the 2015 tragedy. Shahzad realized that the situation would continue to spiral downwards unless drastic action was taken. “There was no clear deliverable solution for greening the city with the right species and in the shortest possible time. We thought of doing a pilot to see if it becomes successful.  Once it started showing results we formed the company and started offering this as a solution to everyone,” he says.

A forest in the middle of Karachi

For his pilot project Shahzad selected an area, which had become a garbage dumping ground, in Clifton. The director of the Parks Department gave him permission to use the dump for his project as long as he was willing to finance it himself. Shahzad invited Shubhendu Sharma, founder of the Bengaluru based Afforest. Afforest is a firm that grows urban forests around the world based on Miyawaki’s technique. Armed with Shubhendu’s expertise and his own passion, they set to work on creating a forest in the middle of Karachi. 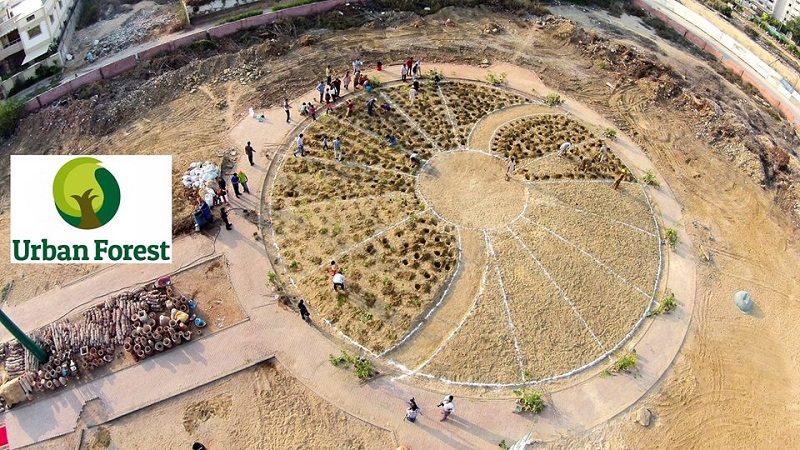 The forest twenty months ago

Today, almost three years later, the forest is a sight to behold. The 400 square metre space has 1200 trees, with some of them reaching 25 feet in height. But Shahzad is just getting started. He plans to populate the park with 50,00 trees, community composting, a butterfly garden, children’s playground, a vegetable patch and a skywalk among others.

Inspired by the success of the pilot project, he launched Urban Forest in January 2016. “My vision is to convert big parks into forests in the city. I believe in keeping achievable targets and goals which keeps me motivated. My mission is now to restore our green spaces with native species across the country with whatever limited resources we have.”

To that end, Urban Forest offers consulting and turnkey services to its clients who want to develop forest in their homes, offices, factories, open spaces, farm houses, mosques, schools and pretty much anywhere else. 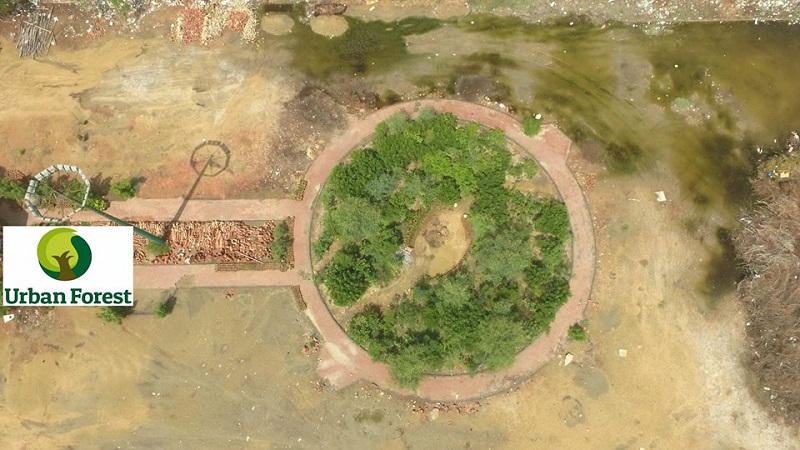 Shahzad bootstrapped Urban Forest with his personal savings. The team comprises only of him and a couple of gardeners. Apart from creating the flagship forest in Karachi, they have done seven commercial projects thus far. He says that people love the concept but find the expense involved daunting. Given how niche a space his startup occupies, the revenues from Urban Forest are too negligible to be considered profitable.

Shahzad depends on his other entrepreneurial ventures for income. The fulfilment he derives from this project comes in a different form. “Our forests deliver 30 times more oxygen, sequester 30 times more carbon dioxide, are 30 times denser and some 1000 times more bio diverse than normal plantations,” he says. Going forward they aim to partner with large corporates and donor agencies to convert large areas into forests in the city and hopefully work with the Government to create bigger forests outside city.

Shahzad hadn’t reflected on his carbon footprint prior to the summer of 2015. But since then, it’s all he thinks about. “It was an eye-opening time to see that our collective actions have created such a monster. I have been studying a lot on what the human species has done to the planet and how we will end up in a huge disaster.”

For a while he suffered from acute anxiety about the future. “More than anxiety, it’s helplessness. We have really created a monster and we need to come together and fight it with all we’ve got. We are in a state of emergency and people think it’s all going to be fine.”

But he was determined not to let negative overwhelm lull him into apathy. He decided to practice what he preached. “I refuse plastic bags at stores when purchasing something. I am trying to refuse straws as much as possible. I don’t buy bottled water. Instead I carry my own steel or glass bottle and refill it as I go. I segregate my trash and compost the wet waste in my house. I further separate the rest into recyclable, metal, glass and plastic.” By tweaking certain lifestyle habits, Shahzad has drastically reduced the waste he sends to landfill.

He switched the water faucets in his house to low to conserve water. He waters his plants with the waste water generated by his household. When the going gets tough, he looks to his heroes for inspiration. Shahzad says, “I really admire the dedication and work of Tofiq Pasha Mooraj. I also absolutely love the work of Shubhendu Sharma and his team who work on creating forests like it’s a walk in the park.  They continuously research on enhancing the results of the Miyawaki method and have done wonders in this field.” 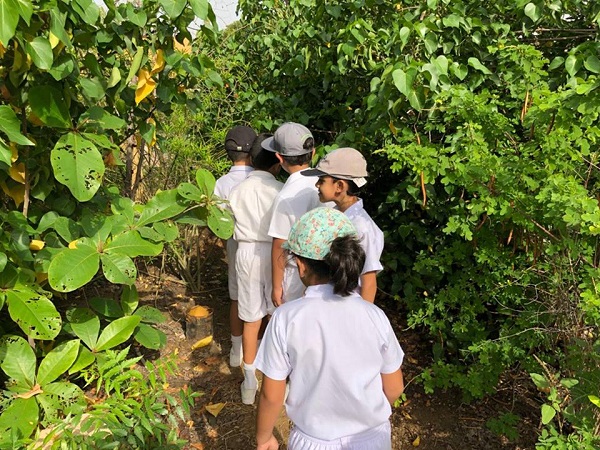 School children having a field day at the forest.

Shahzad feels that there is tremendous opportunity in the environment industry to innovate. It is the perfect space where conscientious and creative individuals can do work that adds value to the world and fulfils their lives. “I believe the industry to restore the planet is shaping up.  Not just in Pakistan but worldwide.  It should happen really quickly given the issues at stake, but there is humungous opportunity in Environment Restoration. Be it energy, water conservation, recycling, replacing plastic with compostable substitutes, organic food supply, forestation – the fields are wide open.”

Shahzad is a serial entrepreneur and does not find the process of running a business difficult. But given the nature of the work, and how radical the idea is, he admits that Urban Forest consumes most of his time and energy now. 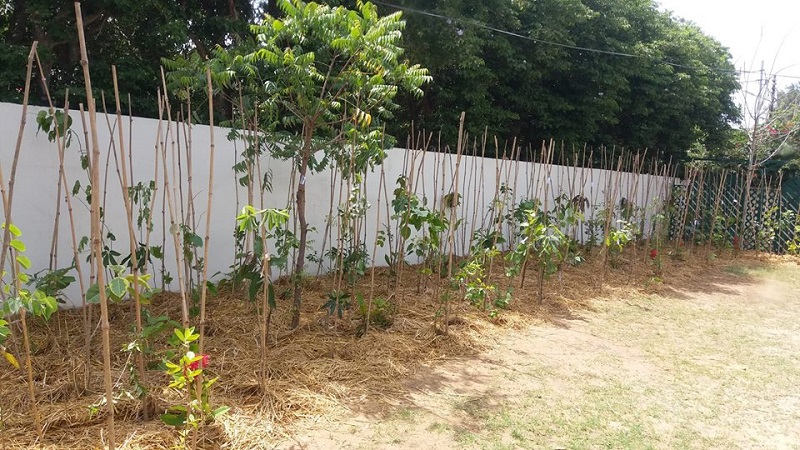 Sowing the seeds for the next urban forest in another location in Karachi.

The early days of building something new are always rocky, but he is confident about Urban Forest’s bright future. “We are pushing ahead to make our cities green, for our own survival.  I see Urban Forest playing a major role in creating that change.”

Shahzad’s advice to those looking to create change of their own: “Look for something that really excites you and then run after it like there is no tomorrow. The money will follow.”