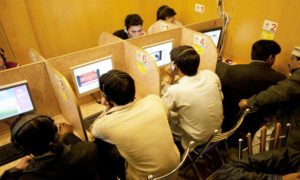 According to a UN report released on Tuesday, as many as 16 million Pakistani users went online for the very first time between 2012 and 2015, representing a new generation of the internet users in Pakistan. It is significant to mention that this number makes up half of Pakistan’s total internet population.

Also Read: Reasons why digital Pakistan is the needs of the time

3G and 4G, the vital contributors

The influx of 3G and 4G in Pakistan are the pivotal contributors in terms of increased connectivity and advanced internet penetration. In just one year the internet population grew from a meager 3% to a noticeable 15%.

In terms of internet users during the period, Pakistan became one of the top 10 economies in the world. Pakistan is positioned at No. 9 on the list in comparison to India (1st), Iran (7th) and Bangladesh (10th).

Quick Read: Jazz and Warid keep the Lion’s share as 3G and 4G users in Pakistan continue to rise

Rise of the E-commerce industry

Online business is developing quite rapidly in Asia. Three of the four biggest e-commerce markets are Japan, China and South Korea. In Pakistan, e-business is prospering too with Daraz as the largest e-commerce organization trusted by a great many individuals. The presentation of international chain, for instance, Careem and Uber has likewise added to the internet subscriber base of Pakistan.

In addition, most of the e-commerce and various other digital applications are assisting number of small businesses and budding entrepreneurs to grow. Furthermore, it also helps them in growing and connecting with the global markets besides generating a greater chunk of income.

To make Pakistan’s e-commerce industry flourish, the tax imposed on internet ought to be chopped down. Not too long ago, the Government of Punjab levied 19.5% tax on internet. Punjab has add up to 60% of Pakistan’s economy yet out of absolute shock internet intrusion is still as low as 15%. However Punjab Government, rather than making internet available to more individuals, has forced 19.5% tax on DSL, 3G and 4G, making it more costly.

For Pakistan to secure No. 1 position, the government needs to develop a framework through which the connectivity of internet is available to maximum possible regions. Moreover, government also needs to chop down the tax to the service providers as well as to the end users.