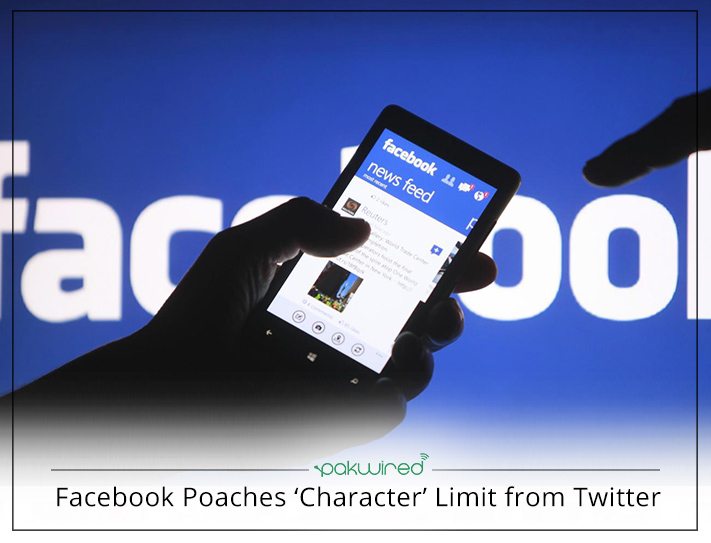 If someone said, ‘Facebook needs a bit more character’; the best way would surely be to get some of it through poaching the character limit feature from Twitter. Am I right?

Maybe not but this is exactly what Facebook is doing currently. The social network’s new feature is all but similar to Twitter’s famous (partially notorious) character limit. The 140 character limit that makes grown up intellectual politicians use abbreviated words like ‘welcum’ & ‘h r u’.

Mark Zuckerberg wanted to buy Snapchat once. The offer was tabled; some well-dressed lawyers in suits tried to get it to work but unfortunately that deal fell apart. But excuse me, here we are talking about Zuckerberg, a person who isn’t known as someone who’d take no for an answer. And did he take that no for an answer well?

No, of course he didn’t; many (imaginary) points to you for guessing this correctly.

The thing is if you didn’t know how the intricate mysterious world of ‘Snapchat’ works, you may even think WhatsApp is the first app that came up with the ‘story’ feature. Snapchat is an app that targets a different demographic and really doesn’t wish to expand too much. It likes the cloud of mystery that engulfs it and WhatsApp dwarfs it in term of popularity.

So, for many people using the feature for the first time on WhatsApp or Facebook, the feature remains an innovative one. A feature that shows how brilliant the company is and how well it understands the changing customer dynamics.

You may debate the ethical aspect of this strategy, and may think of all the lawsuits that Apple goes through in protecting its brand identity, but Facebook just doesn’t really care on poaching the best features from its competitors. The competitors may not like it, but their dislike won’t stop Facebook from stealing a bit of character off them.

Go to the ‘create a post box’ and select one of the colored circles, write in the box and you will notice that your message has appeared against a color background. Facebook is offering many colors circles varying from single to different multi-colors.