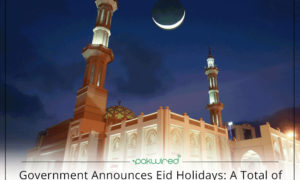 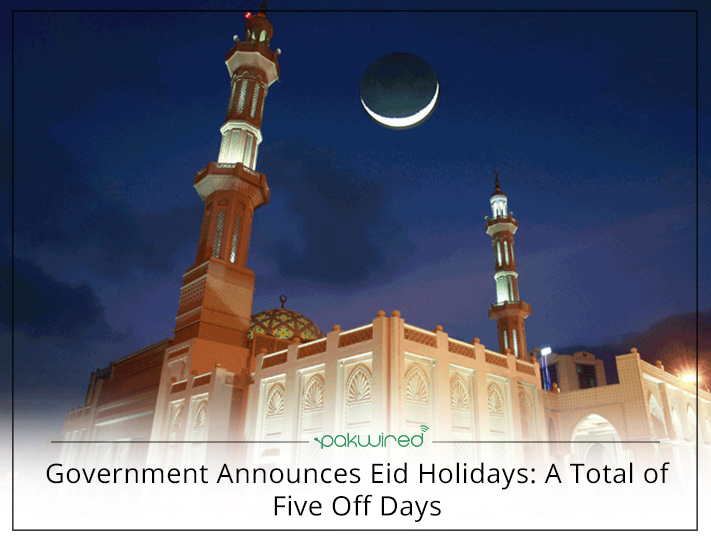 According to the notification generated by the Ministry of Interior the three days Eid holidays this year would consist of June 26, 27 and 28 (Monday, Tuesday and Wednesday). All private and public offices shall remain closed during these days for the holidays marking the festivities of the auspicious Eid occasion.

Also Read: What Are The Fitrana And Roza Fidya Amounts For Ramadan 2017?

Subject to the sighting of Shawwal moon at the end of the holy month of Ramadan, Eid ul Fitr is expected to fall on either June 26 or 27. It is interesting to point out that since it’s a weekend preceding the Eid holidays, the total count of off days shall be more than three. The holidays, in effect, shall take off from June 24. In this way, employees of all public and private companies will get a total of five holidays for Eid-ul-Fitr.

As has been an unfortunate practice in Pakistan, various localized and unofficial Ruet-e-Hilal committees across the country publicize moon-sighting for the months of Ramadan and Shawwal without adequate and justified evidence. This year, the government expressed its resolve to curb this practice by ensuring that the entire country uniformly observes the month of Ramadan and celebrates Eid on the same day. Preparations of the draft of the ‘Pakistan Ruet-e-Hilal Bill 2017’ by the Ministry of Religious Affairs has been a part of this resolve. However, things have remained unchanged.

This year, as per the decree of Central Ruet-e-Hilal Committee, the Chairman Mufti Muneeb-ur-Rehman had explicitly ruled out Ramadan moon-sighting on May 26. The Committee meeting announced, backed by the scientific evidence provided by the Pakistan Meteorological Department that the holy month of Ramadan would start from Sunday, May 28, in Pakistan. However, this time around as well following the lead of Mufti Shahabuddin Popalzai, all the seven agencies of FATA: Khyber, Kurram, Orakzai, Mohmand, Bajaur, North Waziristan and South Waziristan; and some districts of Khyber-Pakhtunkhwa (KP) province observed the first of Ramadan on Saturday, May 27 — a day ahead of the rest of the country.