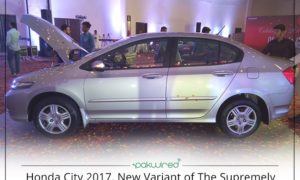 Honda Atlas has pulled off an extremely surprising move by introducing the latest variant of Honda City in Pakistan. This was definitely a big moment for Honda as it introduced the new model in a not publicized, privately organized event in Flattei’s Hotel, Lahore on Monday night. The new model was unveiled in front of company employees as well as some exclusive dealers.

It is pertinent to mention here that PakWired had been the only publication that had broke the news of Honda Atlas bringing a new variant of City in the market, in our forecast of car launches expected in 2017, back in January 2017.

Also Read: List of Upcoming Cars Launches in Pakistan in 2017

Speaking at the occasion, Mr. Tochi Ishiyama, the President of Honda Atlas stated:

“We extend extreme gratitude to our customers, as they have stayed loyal to Honda and more specifically appreciated Honda City from the past twenty years. This ceremony does not only highlight the 20- year milestone of Honda City in Pakistan, but it also serves as a testimonial to the success of Honda in Pakistan. 2017 has been a year of great success and record breaking sales for Honda Atlas; the company managed to sell 35000 units, which is a 37pc year- over-year increase in the sales. Once again we offer our utmost gratitude to Pakistani customers for valuing Honda Brand, reliability, comfort, performance and convenience are the key elements of Honda cars, and we hope that this ( ranged of) models will continue to provide all of the above- mentioned features in spades.”

The specs of the new model, Honda City 2017, have been introduced with minor inflated price of Rs10000 per car. New rates are as follows:

Honda City 2017 is available in the following colors:

The new Honda City 2017 is offering quite a diversified features range: