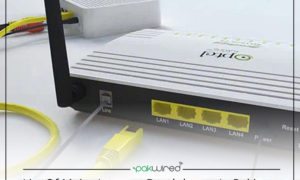 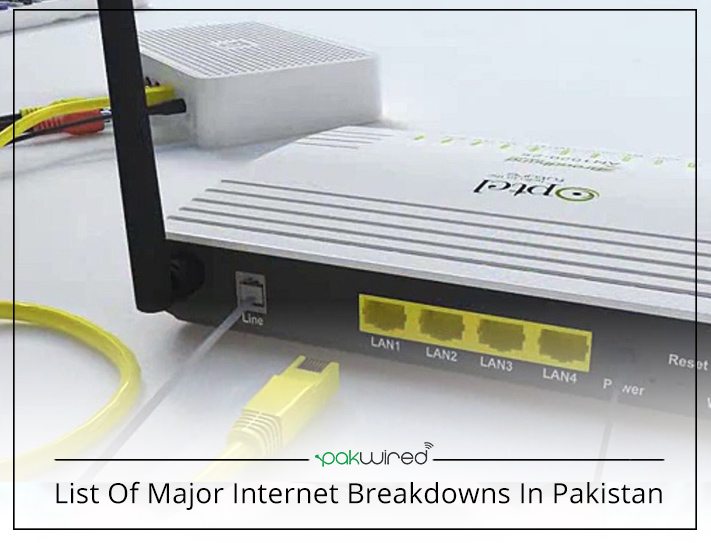 Internet made its way to Pakistan only in the last decade of the twentieth century. From having 1.3% of the population using internet in 2001, to becoming the 14th largest broadband subscriber country (45,500,756 users) in 2017, Pakistan has come a long way! However, one feature that has remained consistent during this journey of evolving internet architecture in Pakistan has been the frequency of internet breakdowns rendering the IT structure ineffective without a backup in place. One reason, perhaps the most significant one, for this is that the major chunk of the country’s Internet routes go through one single carrier: the state-owned Pakistan Telecommunication Corporation Limited (PTCL) in Karachi via upstream Internet Service Providers (ISPs) spread across the country.

Here is a list of all the major internet breakdowns in Pakistan with the recent ones listed first:

Recently, Pakistan faced a major internet breakdown which continued for two days. In an official statement by PTCL, the cause of internet failure was identified to be a major flaw in the IMEWE underwater cable near Jeddah, in the Arabian Peninsula.

The internet was restored after two days.

On the 26th of December 2016, Pakistan braved yet another breakdown in the internet services. The main reason for this disconnection was some fault in the PTCL fiber optic cables. Along with the internet, cellular and landline phone services were also disrupted.

@Fir3demon This issue is being observed overall due to IMEWE Cable Systems.Teams are working and an early resolution will be ensured.

The main cut in the fiber optics resulted in an internet outage which was soon fixed by PTCL.

Impacting the whole region of South Asia, the internet services were affected in Pakistan as there was a major breakdown in the IMEWE submarine cable. Linking India and Europe via Middle East, the IMEWE is an ultra-high capacity fiber optic cable. The fault occurred in the cable in the region between UAE and Karachi and delivered a severe blow to the internet services in Pakistan.

Maintenance of the cable was immediately started as PTCL reported that it could take a week to bring the services back. The fault occurred on 28th December 2015 and was restored fully a week later.

On 24th June, 2015, Pakistan faced an internet outage as the underwater cable; SEA-ME-WE 4 was affected. The cable linking different countries was affected and resulted in browsing speeds becoming abysmally slow across Pakistan.

One of our Submarine Cables (SMW4) has developed a fault. Location has been identified and team is working on restoring the connectivity.

The SEA-ME-WE 4 cable manages almost 40% of Pakistan’s total bandwidth. Pakistan faced slow browsing on 25th April, 2013 when the cable went under maintenance and repairs. The SMW 4 is one of the four cables which connect Islamabad globally via the internet.  A fault was developed in the cable in the region between Egypt and France. The main reason of the break down was said to be the maintenance work done on the cable.

July 8, 2003 marks another day of internet breakdown in Pakistan, as PTCL’s submarine cables developed a fault due to power fluctuation. The breakdown lasted for 17 hours (Monday 2pm – Tuesday 7am) and disrupted the country’s connection to the outside world costing service providers over Rs5 million that day. Due to heavy rain and strong wind, there were distortions in repairing the internet connectivity. However, after a period of 17 hours, services came back to life.

The reason for the internet outage on April 4, 2003 was due to physical damaging of the STM-1 cable. The cable was damaged while NHA workers were doing some construction work and accidentally damaged the cable. Users were still provided with internet at that time through a backup. However, the backup was not strong enough to meet the general requirement of the users.

Faults in cables have always been the reason of internet outage in the country. PTCL has been offered by different companies to provide backup services but PTCL has maintained a continued refusal to take any help from other organizations. There have been a brewing view to impose a penalty on PTCL in future so that it takes this matter seriously as hundreds of companies face billions of losses due to internet breakdowns in Pakistan.

Let us hear from you, what is your opinion on the matter?