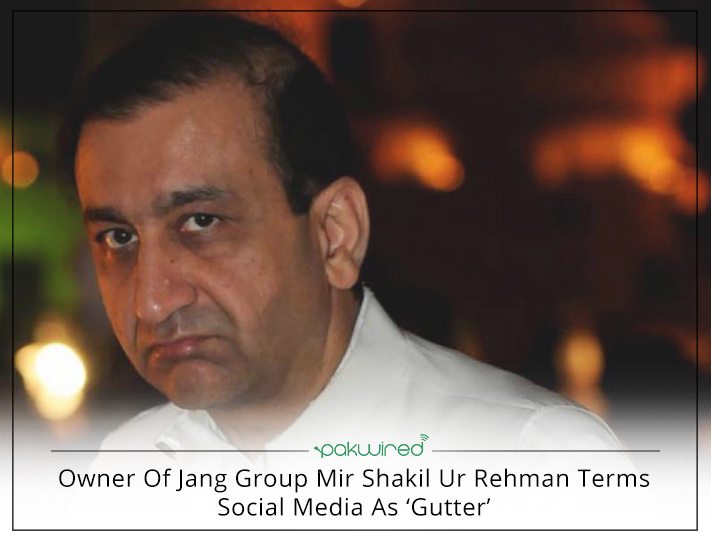 The owner of Jang Group and Geo Television Networks, Mir Shakil Ur Rehman thrashed social media yesterday during a press conference and termed it as a ‘gutter’. Additionally, he went on saying that over 75% of the world population also think in the same manner.

While holding a press conference yesterday outside the Supreme Court, he stated:

“Rubbish is being peddled on social media currently. 75 percent of social media is rubbish in the world. International people term it as gutter. It is a gutter”

He busted his remarks after he appeared in front of the Supreme Court where he was sorry before the judges for airing fake story about the Joint Investigation Team (JIT).

Jang Group or someone pivotal from their organization did not call social media a gutter for the first time. The company precisely used the same very words for the social media some 5 years ago.

Everyone is free to form their opinions. However, disgracing a particular medium which is used by every 1 out of 6th person is something to be concerned about. The harsh statement of Mir Shakil Ur Rehman regarding social media was actually an illustration of how low his comprehension is about how social media works. He went on saying:

“Imran Khan uses social media because it’s free for him and for all the politicians; even for PML-N to post whatever they want”

His conflict with social media is evident from the aforementioned statement as he was of the view that everyone can use this very medium according to his will. While making this statement, he actually forgot how he misused the authority and went on to publish a fake story about JIT.

Apparently, social media is not liked by plenty of people including Jang Group since it poses a challenge to conventional media.

The experts have advised Mir Shakil Ur Rehman to learn and understand the demographics of the social media. Moreover, he should initiate exploiting its potential rather than opposing it.