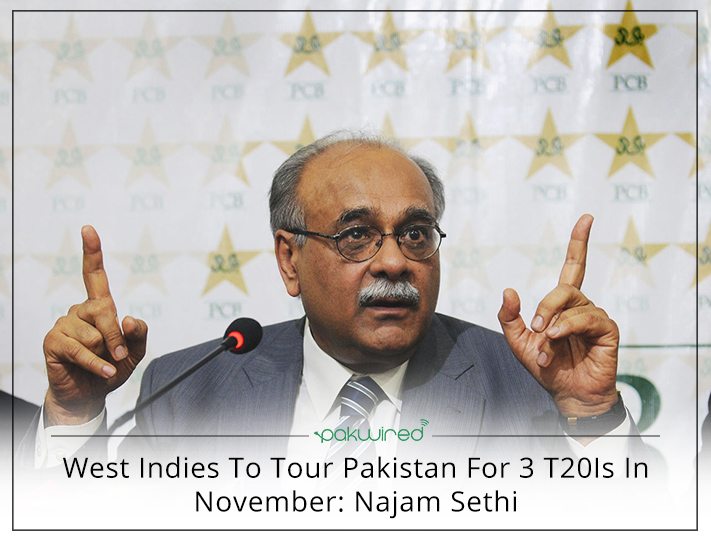 During his press conference in Lahore, he said that WICB has agreed to play three T20Is in Pakistan. However, the tour is subject to security clearance.

In addition, it was also mentioned that ICC-sponsored security experts will give a go-ahead after analyzing the security condition of the country.

Also Read: This is how Twitter paid tribute to Younis and Misbah

While addressing the media, Najam Sethi confirmed that World XI will also be coming to Pakistan in the second week of September for 3 T20Is. He said that the 3 matches will be played across 4 days. However, he refrained from announcing the dates due to security reasons.

The World XI team will be announced in next 3 days. Najam Sethi said:

“Andy Flower will be the manager of the World XI team, rest of the names will be announced in 72 hours”

A 15-member World XI squad will take part in a 7-day long camp in Dubai before heading to Lahore for the series.

Moreover, the PCB chief also went on to confirm that Sri Lanka will also be coming to Pakistan for one T20I in October this year. The Sri Lanka Cricket Board (SLCB) also confirmed that their team would go to Pakistan for at least one T20I match.

The chief of SLCB, Thilanga Sumathipala has extended his offer to support Pakistan in testing times. He said:

“Sri Lanka suffered through three decades of terrorism and war and at one stage no one wanted to come here — Pakistan stood by us then, as did India”

He has also requested other cricketing nations to support Pakistan and end their isolation by visiting there for cricket.

Do you think these three cricketing tours will go ahead as planned?