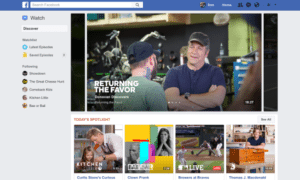 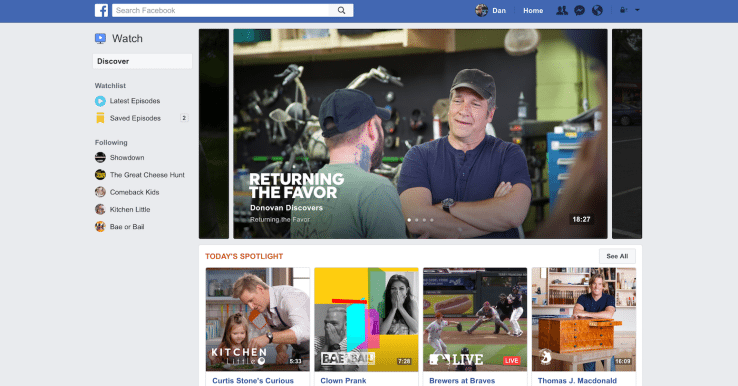 Facebook has constructed a new home for original video content. With this new platform, Facebook partners will publish their content and will earn 55% of the generated revenue while the rest of the 45% will be donated to Facebook. Named as the Watch Tab, a number of original shows will be rolled out to users in the US tomorrow.

The Watch tab will feature different categories of content like “What’s Making People Laugh”, “Most Talked About”, and “Shows Your Friends Are Watching” with other recommended live and recorded shows. These shows can also be shared by the publishers to their newsfeed in order to promote them. The Watch tab contains a watch list feature which enables users to add programs to their watch list. In addition, they can also subscribe to get updates regarding their shows. Besides that, it enables fans to connect with each other and with the producers of the shows.

Although the feature will be rolled out to a small number of users, Facebook has promised to expand the accessibility to users outside the US too. The feature can be recognized as a small TV-shaped watch button at the bottom of the Facebook homepage.

The number of shows hosted right now are not much. However, Facebook will lure in creators from all around the world to promote and publish their content. According to a Facebook spokesperson:

“We want any publisher/creator who is interested to be able to create a show in the future. So there will be hundreds of shows at launch, and we’ll hopefully scale to thousands” 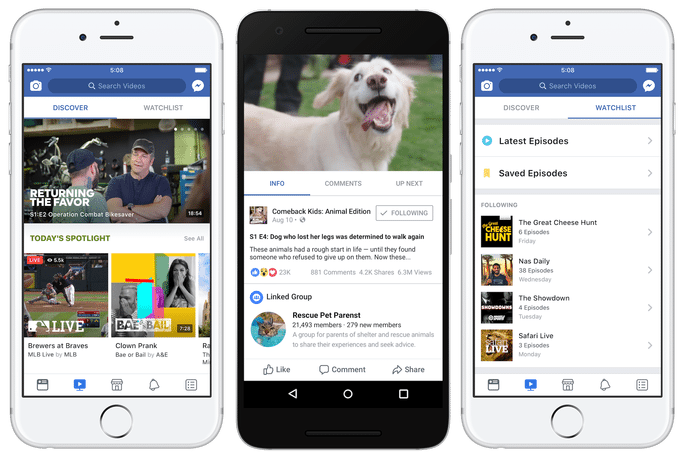 “More and more people are coming to Facebook in order to watch video. When they come with that in mind, we want to make a place for them where they can find that video, connect with the creators and publishers they love, and know they won’t miss out if there’s a new episode from one of those creators”

A list of programs initially available on the Watch Tab is listed below:

However, there is an absence of long-term scripted shows which the general public is used to. Watch Tab features small programs ranging from short documentaries to reality shows and more.

“We believe it’s possible to rethink a lot of experiences through the lens of building community — including watching video. Watching a show doesn’t have to be passive . . . You’ll be able to chat and connect with people during an episode, and join groups with people who like the same shows afterwards to build community”

Watch Tab consists of a long list of shows you can scroll through. Once you have selected your desired episode, you will see all the details about that particular show. There will be another tab that will feature a live chat with mutual watchers so you can talk and discuss about the show with real people at the same time. It will also feature an “Up Next” tab which will display the upcoming episode.

Publishers have the choice to generate revenue by placing ads between their shows. However, the length and position of the ads hasn’t been finalized by Facebook yet.  Publishers can also start a Facebook page for their shows in order to develop a community of watchers to interact with one another.

The video tab was introduced by Facebook in April 2016 which featured videos your friends liked or tagged you in. However, these videos included the ones you might have already seen before. With the new Watch Tab feature, Facebook will deliver original content instead of a random one. This will give Facebook a revenue boost as publishers will pay Facebook to promote their content on the newsfeed of other users.

There are a number of competitors such as YouTube and Snapchat who have already experimented original content. YouTube rolled out YouTube Red to promote such content and it has been quite successful in producing big budget shows on its platform. Snapchat also tried to do the same but recently it switched to signing deals with TV partners to deliver original content to users through its ‘Discover’ tab.

On the other hand, Facebook has an advantage in this field as its new feature is available for all platforms. This means that users can access the Watch Tab from their smartphones as well as their TVs. Facebook is already home for 1.3 billion users and with this new feature, more and more users will switch to Facebook for new shows and original content.

With original programs, Facebook can surge the number of its users. Users looking for videos and new shows to hook up on will surely visit Facebook and try out its Watch Tab.

Facebook has always been looking for generating revenue and dominating the overall internet market. With Watch, it will challenge the television industry as people will switch to Facebook to watch shows and sports. With all the revenue generated through these strategies, Facebook will gain a hefty amount of users in the future.