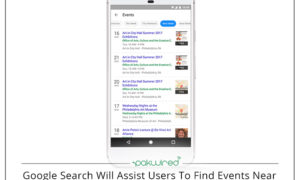 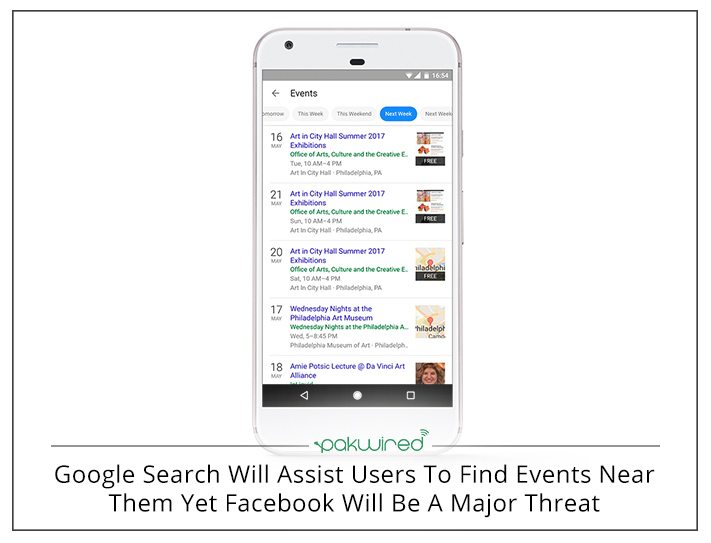 Google is constantly striving to enhance its mobile app experience. The tech giant recently enabled its users to search for events which are either happening now, or about to happen in the near future. This service upgrade is currently being launched in U.S. The users can search for various types of events such as festivals, concerts, lectures, sports events etc. According to Google officials, there has been a dire need for this feature as they had observed millions of searches on a daily basis regarding ongoing events and activities.

However, one cannot deny that the events’ domain has always been dominated by Facebook. The popularity of Facebook event feature is growing rapidly as 100 million users used this feature daily as per last year’s statistics while 650 million users use it across Facebook app.

Also Read: 15 exciting Google apps you may not be aware of

It works on a very simple model where Facebook page owners create a list of upcoming events and users can subscribe to this event by selecting from the options such as interested in, may be attending or not attending. Therefore, the user’s activity shows up on the newsfeed and eventually becomes public among the friends’ list of the user.

Another barrier for Google could be the users’ interest to directly contact the ticket seller through web search when trying to buy a ticket for an event.

However, Google can combat these threats to a large extent by using its most competent strength i.e. ability to organize information most effectively and make it readily available to the end user.

Google partnering with some event-related sites

Google has sealed the deal with a few event-related websites in order to get access to the right data. Once the user types any relevant query such as “Jazz concerts in Austin”, all related events will appear in the result.

However, it is expected that the list will grow in near future. Moreover, the company has also developed a set of guidelines for developers; for those who want their event listings to appear in Google search results.

Google also provides an updated search option where the users will be able to see more details regarding the event. Details including event title, date, time and location. Additionally, it also offers a feature of “more events” which has a more detailed list of events to choose from. Once an event is selected, Google will route the user to the relevant website to purchase the tickets.

Google has gone through this hassle in order to keep its mobile users glued to Google app rather than on other apps. Currently, the company is neither taking any commission on ticket sales nor has it partnered with any outside event- website.

Users could also search based on weekly planner format

Interestingly, users also have an option to view the new list of events in a weekly planner format. The users can search the activities based on the time frame such as events happening ‘today’, ‘tomorrow’, ‘weekend’ or ‘next weekend’.

Apart from time based search, the users can look for events which are happening near them by typing in “events near me”. This will provide them with the most relevant events regardless of the event type.

The new feature is so far launched on a mobile web and Google app in U.S. for iOS and Android devices. There is no word yet by the tech giant to launch this service in other countries.