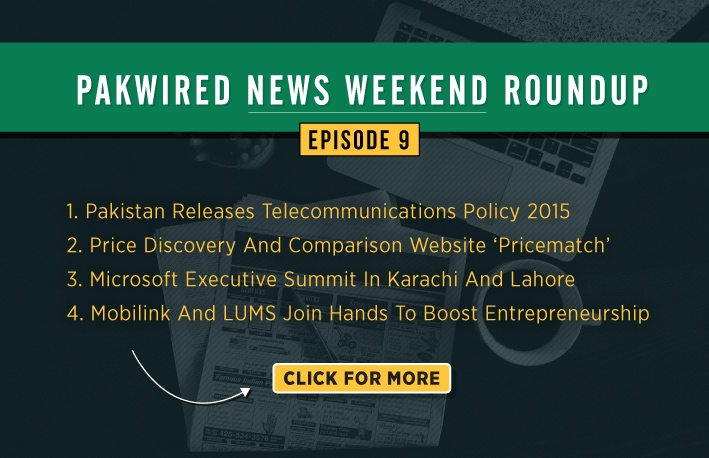 Summary: The Economic Coordination Committee chaired by Finance Minister Ishaq Dar approved the Telecommunications Policy 2015 during a meeting on December 11. We recently released a brief in-house analysis (overview) touching upon its salient features, especially with regards to end-user services. We found the policy to be robust, comprehensive and quite dynamic. The telecom sector in particular was appreciative of its elaborations. Click here to read our overview.

Summary: Our colleague S. Aijaz reviewed Pricematch, a meta search engine which helps users in price discovery and comparison. The product was developed by London-based vSolv Technologies Ltd, founded by Sajid Mushtaq (Manager) and Khalid Mushtaq (Business Manager) which also has an office in Lahore. Presently, the categories of products on their website are limited, as they’ve themselves admitted. However, their comparative analytics are expansive, and, most importantly, impressive. The website has a user-friendly interface without the usual clogging of unwanted, pestering advertisements. Click here to read our review.

Summary: Microsoft Pakistan organized a 2-day summit covering the prospects of operations through cloud technologies. The first summit was organized in Pakistan’s economic hub Karachi on December 14 whereas the second was held in Lahore on December 16. Guests from relevant industry sectors were in large attendance. Some of the issues covered included Enterprise Mobility Management and Advantages of Internet of Things. Most importantly, however, the focus of the executive summits was on shifting to appropriate cloud platforms to execute reliable and efficient business operations. Mr Nadeem Malik, Country Head of Microsoft Pakistan, reiterated his company’s commitment to provide maximum facilities for IT consumers in the country.

Summary: Under its ‘Make Your Mark’ initiative, Pakistan’s largest telecom operator Mobilink has provided funding worth $45,000 to the LUMS Centre for Entrepreneurship to sustain funding for 15 innovative startups currently in the works at LCE, thereby boosting the country’s tiny startup ecosystem. These will get the opportunity to interact with Mobilink staff across its corporate network for regular advice and also one-on-one mentorship. Mr Omar Manzur, Senior Director for Corporate Communications at Mobilink, told a renowned website that his company will continue investing in local startups and is looking for partnerships with other incubators. This is good news for LUMS students who can benefit from Mobilink’s expertise to refine their product development and marketing skills.

Summary: Mrs Anusha Rahman, Minister of State for Information Technology & Telecommunications was honored with the ‘GEM-Tech Global Achievers 2015’ award during a recent ceremony in New York. Mrs Rahman was nominated out of 150 individuals and organizations hailing from 55 countries. The GEM-Tech (Gender Equality and Mainstreaming) event is organized by the International Telecommunication Union (IT) in conjunction with the United Nations General Assembly. It serves as a forum to recognize women leading the world in the ICT sector. We believe Mrs Rahman has made good, if not commendable efforts, in promoting the use of ICTs in Pakistan and trying to revitalize a crucial ministry which had long remained dormant. Kudos!

Summary: Social media giants Facebook, Twitter and Google have agreed to the German government’s request to block and where necessary remove what it calls a ‘rising tide of online rascism’ against the incoming refugees, mostly from Syria. Notably, Facebook is already operating a task force to handle hate speech since September 2015 in partnership with FSM (Freiwillige Selbstkontrolle Multimedia-Diensteanbieter e. V.), a self-regulatory group of multimedia service providers. Bear in mind that German law authorizes punishment of up to 3 years imprisonment if someone is convicted of delivering hate speech on ethnic or religious grounds. Click here to read further details.

Summary: Scientists at MIT’s Computer Science and Artificial Intelligence Laboratory (CSAIL) have developed an anonymous messaging system dubbed ‘Vuvuzela’. Although its workings appear similar to those of Tor, Vuvuzela uses less encryption and a lot of dummy (fake) traffic, which is actually the secret trick, to hide real connections. Each message sent through Vuvuzela routes through different servers which send out dummy traffic to all users in order to create a sort of ‘noise’ and slip the message through it to the intended recipient. So far, the scientists say it is the most fool-proof method developed so far to prevent hostile agencies from collecting metadata. Click here to download the intro to Vuvuzela’s internal structure.

Summary: After an extensive 2-day review by the UN General Assembly based on proposals by the World Summit on Information Society (WSIS), member states have adopted a document which ensures freedom of speech, mutual Internet connectivity and Internet governance (e-governance) to achieve the UN’s 2030 Agenda for Sustainable Development. UN member states noted with concern that majority of households in developing countries (including Pakistan) are without basic Internet access. The recent meetings were held with the objective to stregthen unified policy and international partnership to overcome this critical shortcoming.

Summary: The Middle East’s largest technology incubation centre was recently launched by, and under the patronage of, Sheikh Ahmed bin Saeed Al Maktoum (Chairman of Dubai Silicon Oasis Authority). The Dubai Technology Entrepreneur Centre (DTEC) was established with the UAE government’s vision to support entrepreneurs to develop innovative solutions for the rapidly-transforming world. DTEC’s launch comes after a similar incubation centre was opened earlier by the Silicon Oasis Founders (SOF) in 2012 to encourage local entrepreneurs. Senior officials from Intel, IBM, Microsoft, SAP and Thomson Reuters were among those present during the inauguration.

Summary: Speaking of entrepreneurship and startups, we at PakWired have put together a list of what we consider were/are the most innovative startups of this year (which is almost coming to an end). We’ve picked 15 startups and highlighted why we believe they’ll be leaving an impact in the times to come. Click here to read the article.