Amidst a rising brouhaha over media censorship in the country, Twitter’s Transparency report has added fuel to the fire. Released on Thursday, the microblogging website has confirmed that Pakistan has reported over three thousand accounts only in the first half of 2018. This is 37 times more than the number of accounts reported during the same period last year, Jan-Jun 2017. This also makes Pakistan the third top most country with account restriction request.

The biannual report says that the accounts reported by the Pakistani authorities, have primarily been alleged for offences ‘spreading hate material‘ and ‘inciting violence‘. The request to remove individual Twitter accounts has been another figure, in addition to the reported accounts. 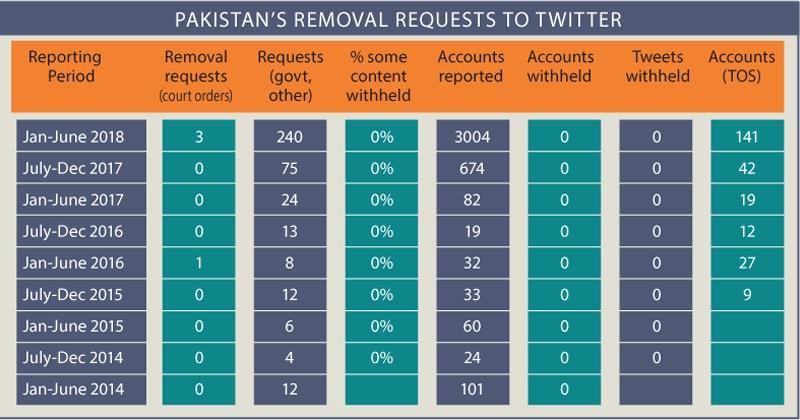 It might be of interest to our readers that the trend of Pakistan actively attempting to oversee the content shared across the social media spectrum has been on a consistent rise. Last year’s Twitter Transparency report for the period of Jan-Jun 2017, had alarming numbers of the reported content, however, the numbers only got trumped in the subsequent reports.

Interestingly, only four weeks ago the social media giant Facebook’s Transparency report had declared Pakistan among the leading countries for censoring Facebook content. The networking company, which has 36 million Facebook users from Pakistan, said that Pakistan made 1233 requests for content restriction only during the first six months, Jan-Jun 2018. The report confirmed that the country has recorded substantial increase in such requests as compared to corresponding period of the last year.

Defending the government against the Facebook’s report in November, Chairman of Pakistan Telecommunication Authority (PTA) Muhammad Naveed had been reported on media citing blasphemy, anti-state content and pornography as the main issues for which the content removal requests were made to Facebook.

Twitter’s data states that during the period of Jan-Jun 2018, the government of Pakistan sent requests for removal of 243 accounts and reported 3,004 profiles. Twitter confirms removing some content from 141 of the reported accounts for violating Twitter’s terms of service (TOS). This needs to be pointed out that in contrast to the earlier precedent, where all the account removal requests were solely generated by the government, this year the government sought court orders for the removal of social media content as well. In this regard, three account removal requests, during Jan-Jun 2018, were sent to Twitter at the behest of the courts.

Explaining the company’s decision of inaction over the government’s requests, Twitter stated:

“We received a legal demand from the Pakistani government specifying 79 tweets for violations of the Prevention of Electronic Crimes Act (PECA). The majority of the tweets contained depictions and caricatures of Prophet Muhammad [peace be upon him]. The reported tweets did not violate our TOS and, therefore, no action was taken.”

Giving his word on the matter, Chairman PTA repeated the same stance he had adopted at the time of Facebook’s report. He said that the majority of the reported accounts were specified for propagating anti-state and propaganda content:

“The number of accounts reported is so high because propaganda accounts operate in dozens and are often created shortly before an [online] campaign goes viral.”

Complaining about the conduct of the global networking platform, Chairman PTA further stated:

“If you look at the compliance rate for India and other countries, Twitter has responded to authorities positively. But when it comes to Pakistan’s requests, it does not comply in the interest of the state.”

It may be pertinent to point out that with the global politics shifting in favour of a totalitarian approach, Pakistan is not the only country with an enhanced sensitivity towards social media content. Going by the data shared by Twitter, 87 percent of the total global volume of legal requests against the content posted on Twitter originated from only two countries: Russia and Turkey. This is, ironically, a consistent trend now. The pack being led by Turkey, Russia and Pakistan, submitted legal demands against 27,811 accounts from 38 different countries.

What could be an alarming revelation for the journalists working around the globe, among the subjects of legal demands by the governments 135 accounts of verified journalists and news outlets were also included. However, to address the public concerns about the state of rights maintained at the platform, Twitter stated in its report: