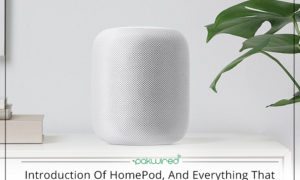 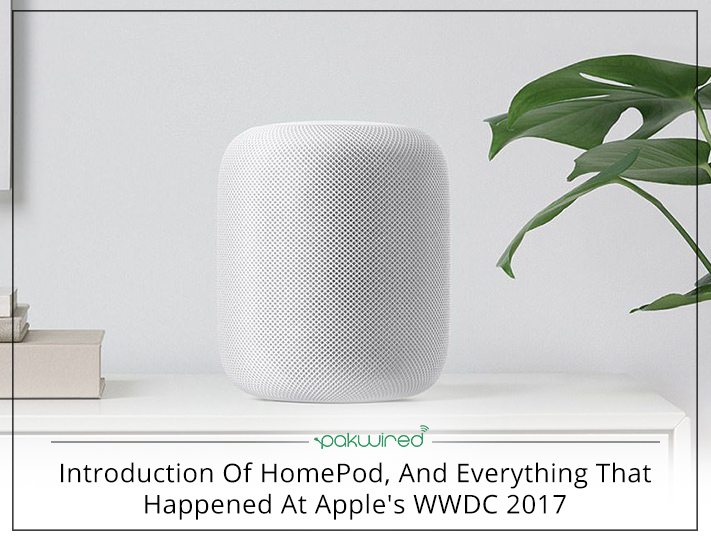 Apple has announced a new gadget at the Worldwide Developers Conference, WWDC 2017. According to the company, the new “HomePod” speaker is about to hit the market with worth $349.

The CEO of Apple Tim Cook said that the smart home speaker is said to challenge the smart speakers of Google Home and Amazon’s Echo. The HomePod will ‘reinvent home audio’, said the CEO when he publicized the new speaker at McEnery Convention Centre in San Jose.

Also Read: iPhone 8 – What do we know about Apple’s next big product?

The HomePod incorporates a woofer and is linked to Apple Music. During the unveiling of the new gadget at the WWDC 2017, Tim Cook said:

“’It’s absolutely beautiful, and we call it HomePod. We’re working on this speaker for later this year”

It works with the same chip as that of the iPhones. It stretches to 7 inches in height and comes in black and white colors. The device consists of a built-in musicologist that personalizes the sound system through a beam forming mechanism technique which adapts to the environment.

How does the new HomePod work?

The Apple HomePod activates with a speech-recognition that goes with ‘Hey Siri’. It also offers the user to control its bass which is powered by seven beam-forming tweeters with a separate amplifier for each. The brain of the audio is the custom A8 chip designed by Apple.

The advanced echo-cancellation technology allows the speaker to detect the position of the user. The audio is then adjusted through an array of six-microphones accordingly. Two speakers can be used at once that provides a much better experience to the user. You can easily set up the speaker by simply holding your iPhone near the HomePod.

The inauguration of the device at the WWDC 2017 further disclosed that the speaker has a lot to offer than just a music box. It can send text messages, set timers, control home devices etc. The new HomePod will be available in the markets soon.

The WWDC 2017 also disclosed the news of soon-to-come iPhone 8 that will be powered by the new iOS 11. However, the public has to wait till September for the phone to be announced publicly.

The iOS 11 will be working on a new Artificial Intelligence and a whole new experience of augmented reality. While addressing the developers at the WWDC 2017, Tim Cook said:

“This is going to be the best and biggest WWDC ever”

The AR feature of the newly introduced iOS 11 will make virtual objects float around in a live area through the device’s camera.

The new iMac Pro is said to be available in December as revealed by Apple in the WWDC 2017. Moreover, the device follows the same design pattern as the 27-inch iMac together with a splendid grey finish.

The new Apple Watch face displays the relevant data automatically that is triggered when the bearer raises their wrist. The smart watch uses heart rate algorithms that keeps you fit through proposed activities. To provide a better interface, characters of Toy Story can be set as watch faces – the characters can move with the wrist.

Apple will announce the iPhone 8 at WWDC 2017, said Rod Hall who is a stock analyst at J.P. Morgan in San Francisco.

According to the Friday report, it is anticipated that Apple will bring forward the preview of iPhone 8 at the WWDC 2017. The new iPhone 8 is expected to have 3D scanning feature, said Mr. Hall.

Steve Troughton Smith, a video game developer discovered on the iOS App Store that required iOS 11.0 or later. This seems-to-be accidental listing of the app which is named as “Files” remains a mystery to the developers.

For which Apple product you are greatly looking forward to?