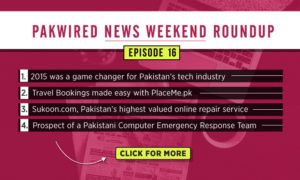 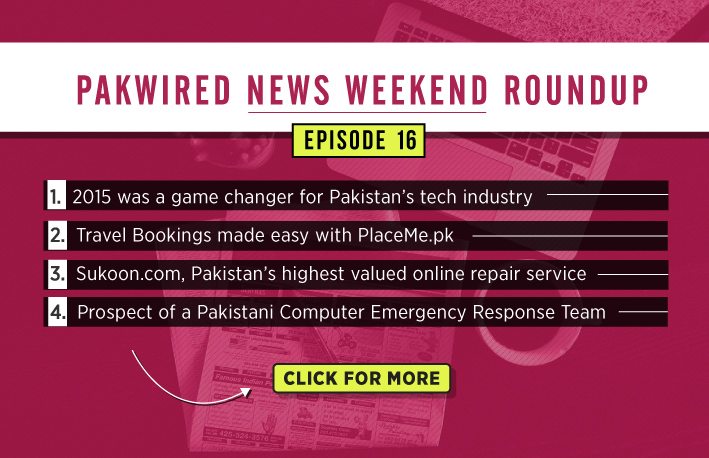 1. 2015 was a game changer for Pakistan’s tech industry

Summary: Pakistan’s IT industry 5 years ago stands in stark contrast to the vibrancy and uplift it has experienced as the security situation and market opportunities managed to improve. Although many problems are still in existence, the industry has, of its own accord and especially through startup incubations, managed to sustain itself for slow but steady progress. Click here to read our assessment on this game-changing phenomenon.

2. Travel Bookings made easy with PlaceMe.pk

Summary: Looking for a comfortable yet affordable lodging in Pakistan during travels can be a cumbersome task. Especially when most of the available options are either partially correct as mentioned or not worth the risk. PlaceMe.pk is a Pakistani project which aims to solve these problems, interestingly modeled on the world-famous Airbnb platform. It was setup by young entrepreneurs Abdul Muqsit and Babar Khan Akhunzada. Absar Kazmi carried out a detailed review for PakWired, click here to read it. You may also click here to read out interview with PlaceMe co-founder Abdul Muqsit.

Summary: Sukoon.com is an online repair service which emerged during incubation at P@SHA’s The Nest I/O. It helps clients hire skilled laborers like carpenters, painters, plumbers, masons and electricians at the click of a button. Despite having tough competitors, the project has managed to secure investments from Crescent Venture, The Indus Entrepreneurs’ Islamabad Angel Fund and Dotzero Venture. The project was co-founded by Shoaib Iqbal and Qazi Umair. Mehreen Omer published a detailed report on Sukoon’s soaring success for PakWired, click here to read it.

Summary: PakWired once again brings readers’ attention to a pressing issue; if Pakistan’s critical information networks are crippled through independent or state-sponsored cyber attacks, will it be able to recover its information and restore its infrastructure? Is there a federal government body which available on-call 24×7 to handle online emergencies which could drastically affect our national interests? Click here to read our editorial.

Summary: Usman Riaz is a multi-talented artist whose interests include music and hand-drawn animation, to name a few. Not only is the young Karachiite famed for performing at TedX as a Ted Global Fellow, he recently set the foundations of Mano Animation Studios, which rightfully proclaims itself as Pakistan’s first hand-drawn animation studio. Usman and his team of young, talented artists are working on a mammoth project called “The Glassworker“, expected to be Pakistan’s first hand-drawn animation film. Usman is deeply inspired by Hayao Miyazaki’s Studio Ghibli and his passion has been acknowledged by global tech giant Apple. Yes, ladies and gentlemen, Apple is giving Usman Riaz the platform to present a live demo of his art works in front of a global audience. Click here for details.

Summary: China and Pakistan took their strategic-cultural ties a step forward with the launch of an Urdu language app for Xinjiang-based ‘Watching Media’. Prominent attendees during the launching ceremony of the app include Federal Minister for Information & Broadcasting Mr Pervaiz Rasheed, Chinese Ambassador to Pakistan HE Sun Weidong, Mr Ji Wenlin from Cyberspace Administration of China and Mr Luo Fuyong, Director General of Xinjiang Information Office. The app aims to strengthen people-to-people awareness and understanding in China and Pakistan and cement the bond of friendship to complement the ongoing projects which are part of the China-Pakistan Economic Corridor (CPEC).

Summary: It appears Instagram has silently introduced the ability to sync multiple accounts without the need to log out of any particular one. Instagram’s notifications will tell you which account is being interacted with. This facility will prove very helpful for brands or marketing agencies for hassle-free social media marketing.

Summary: According to a study published by Facebook, its more than 1.4 billion users are separated by approximately 3.57 connections. Basically, each person in the world is connected to every other person by around three or four other people. Facebook’s research corroborates suggestions that the world is getting smaller and more and more people connect with each other. An earlier research by two leading international universities in 2011 had suggested that people around the world were separated by around four degrees.

9. Apps and platforms with more than 1 billion users

Summary: A number of Twitter users noticed the presence of a new button sandwiched between the options for posting photos and creating polls. On clicking, the button presented ready-made animated GIFs for tweeting. The development comes after rivals like Facebook and Yahoo upgraded their own apps to include support for animated GIFs by partnering with third-party hosts such as Giphy and Tumblr.